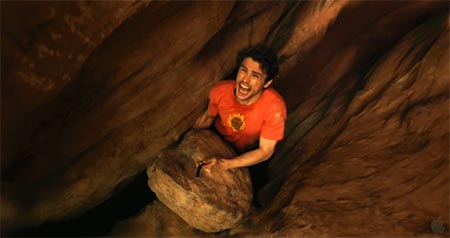 When I first heard Danny Boyle would be directing a film based on Aron Ralston’s true story about being trapped in a crevasse that would be called 127 Hours, my first thought was, “Please, God, don’t let him direct it in real-time!”

I’m not a fan of Boyle’s hyper visual style.  I thought his Slumdog Millionaire was the most overrated film of recent memory and the worst Best Picture Oscar winner in many moons.  But even as a naysayer, I can’t deny he’s become one of the premier auteurs for the “ADD-Hey-Mom-Look-at-Me!” generation that’s grown up on reality shows.  With Ralston’s harrowing true story, Boyle has finally found riveting subject matter to match his out-of-control eccentricities behind the camera.

The film begins in traditional head-throbbing, loud, over-edited Boyle fashion as Ralston (James Franco, excellent in an essentially one-man-show) heads out of town for a weekend of rock-climbing and hiking through Utah’s Blue John Canyon.  After a chance encounter with the lovely Kate Mara and Amber Tamblyn, Ralston once again heads off on his own and eventually falls down a crevasse with a rock that crushes his arm.  Thankfully Boyle is not so hapless as to fail to realize that the natural beauty of the setting, the vast expanse of “wilderness” and Ralston’s singular drama should be the focus.  When that focus hones in on one man’s dire predicament, Boyle enters a whole new ballgame.  It becomes a film where silence is golden, and the noises that arise (the sound of Ralston screaming, rocks being chiseled, bones cracking, thunder rolling) evoke an “in-the-moment” jolt to the audience.