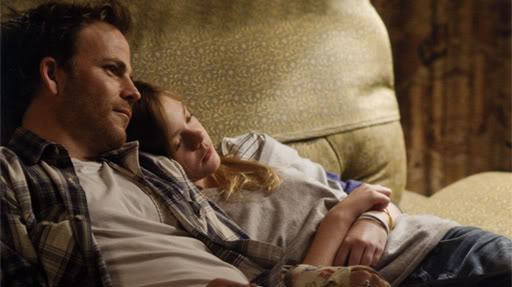 Somewhere out there a great film awaits Sofia Coppola.  In some parallel universe she’s directing a masterpiece.  But not here.  Not yet.

Somewhere is a film that just is what it is…which is a film about nothing.  Even in interviews, the oft-maligned auteur admits in no uncertain terms that the film is really about nothing.  It’s just about the mood…the moment.  And like all of Sofia Coppola’s films, it grows on you as it languidly progresses.  You get used to the cadence and the ennui, the repetitive imagery, the sometimes uncomfortably sustained shots (oh, imagine what she could do with neo-noir or psychological horror) that ultimately signify the vapid nature of isolating stardom and luxury.  And when the bored movie star (Stephen Dorff, scruffy but agreeable) is temporarily interrupted from his nothingness by his bright and mostly cheery young daughter (Elle Fanning), you get a muted fuzzy feeling, melancholy somewhat, and little bits of humor, embarrassment and do-nothingness fun contribute to a glazed, dreamy atmosphere where you like what you see, you get the feeling, and the mood is alright, baby.  But there’s nothing there.

Which brings me to this…which I touched on in some recent exchanges at Jason Marshall’s excellent Movies over Matter blog and have decided to elaborate on here:

Sofia! Stop writing your own scripts! I know, in the brutal irony of the biz, you won an Oscar for your writing…but you are a natural-born director.  With your screenplays you are stuck going around in circles just like your main character’s Ferrari in the opening shot of your new film.  In the end, he’s driving in a straight line seemingly getting as far away from Hollywood as he can.  I hope that is symbolic of you doing the same thing.  I remain an optimist, and I hope that was your little wink to your audience that you are about to go down uncharted paths.

Maybe Somewhere was the film you needed to make before moving on.  I understand…you touched on it a bit in the thinly veiled Lost in Translation (which I still love despite so much backlash) and explored it through the lens of a lavish period-piece in Marie Antoinette (which was unfairly dismissed), but you needed to fully purge it from your system.  You finally reached the depths of which you could dive exploring the theme of the boredom of the elite (especially spoiled little girls with daddy issues) and at the bottom of that ocean of your own internal emotional turmoil…you found nothing.  Hell, it wasn’t even really turmoil, was it?  It was what it was.  Now let’s go do something.

Hey, people like to knock you and write off your career to nepotism, but any cineaste can see you have the natural chops.  You just need to expand your horizons.  Had Somewhere been made by a French filmmaker, it would’ve been universally lauded.  And I love how you don’t even care about the nepotism charges by choosing your husband’s band Phoenix to do the score for your film.  Go on, you have great taste in music, and keeping it in the family is fine as long as the talent is there to back it up.  You know how to use music in films, and your sound design grows more intriguing with each film and is now verging on Lynchian.  Keep stretching the boundaries there.

Why don’t you collaborate with your old pal Quentin Tarantino?  Let him write a script…for a heist film perhaps.  And you direct it.  Imagine – his snappy dialogue…your penchant for letting a camera linger too long being used not to express ennui this time, but to build tension.  And you can collaborate on the music choices.  Take a few for-hire genre jobs and knock them out of the park.  Use your connections to work and collaborate with the best people, not just those in your family.  But, yes, you can help them out, too – I’m not contradicting what I said in the previous paragraph.  I’m just sayin’ – there’s more out there…and YOU KNOW PEOPLE.  USE THEM.

Sofia, you know how to make movies.  You grew up in the business.  You know nothing else.  But that doesn’t mean your films have to be about nothing.  We don’t need more somewhere…we need more something.  Go out and find it.