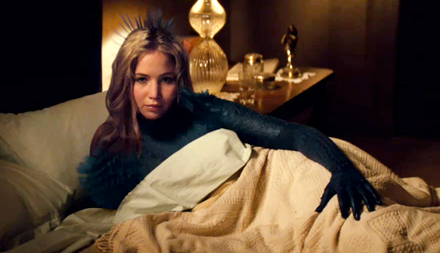 Oh my dear, Ms. Lawrence, why so blue?

Hollywood loves to rewrite history – not only their recent movie history, but actual history history.  Here in the context of some mutant hybrid of a prequel and a reboot — a preboot? a requel? — Hollywood has decided to (almost completely – but not without some fan boy in-jokes and cameos) erase the history of the X-Men franchise (and quite honestly, who can blame them after the Wolverine train wreck?) while simultaneously providing us with a shocking Inglourious Basterds style revision of history.  Who knew that mutants were behind the Cuban Missile Crisis?  Thanks, Hollywood!  Knowledge is power!

But the real reason to provide a backdrop like the Cuban Missile Crisis is to create an excuse to go totally a go-go and deck smokin’ hot babes in short skirts and high boots and give uber-villains cool pads with all kinds of Ikea-inspired furniture.  You won’t find me complaining here – the film (and the ladies and the set pieces and the special effects) look fantastic.  At some points this thing was so groovy I half expected Dr. Evil to waltz through the door and ask the mutants if they were enjoying their quasi-futuristic clothes.

Matthew Vaughn (of Kick-Ass fame) is just the right type of hipster director to pull this style off with panache.  And the screenwriters provide oodles of back-story, relationship building and political maneuvering for the parade of zany characters, both human and mutant alike, and all eagerly sucked into the kinetic energy and all-for-fun (but not without a little maudlin excess) feel of X-Men: First Class.  Sure, there’s plenty of cheesy dialogue (the “Mutant and Proud!” line is overused) and one too many montages, but really, who cares about that stuff?

Rounding up a world-class cast of up-and-coming talent helps the proceedings immensely.  As the future Professor X, James McAvoy, in his post Atonement career, seems to be making a case to become the most awkward action star of his generation (remember Wanted?).  Meanwhile, Michael Fassbender is fast rising up to the A-list with his versatile choices from Inglourious Basterds to Jane Eyre to this.  As the mutant who would become Magneto, he’s hella-good.  Then there’s Jennifer Lawrence snatched fresh from her Oscar-nominated turn in Winter’s Bone to play the young Mystique.  There’s no doubt here – she’s a star, baby.  Don’t forget a perfectly cast January Jones stepping confidently from her role as “Ice Queen” Betty Draper on TV’s Mad Men to villainous Emma Frost in X-Men.  Lastly, good ol’ boy Kevin Bacon hams it up to great effect as the lunatic trying to start World War III.

Amidst Vaughn’s 1960’s spy flick inspired imagery, there’s inter-spliced newsreels of Kennedy’s speeches, Russian and American ships facing off outside Cuba, broken-hearted mutants (really this is as much a love story between Professor X and Magneto as anything else), a bumbling CIA, and a go-go dancer with insect wings who spits fire.  As much as I enjoyed this, after the credits rolled I wondered not about Matthew Vaughn’s continuation of this saga, but instead pondered…when is Matthew Vaughn going to direct a James Bond movie?