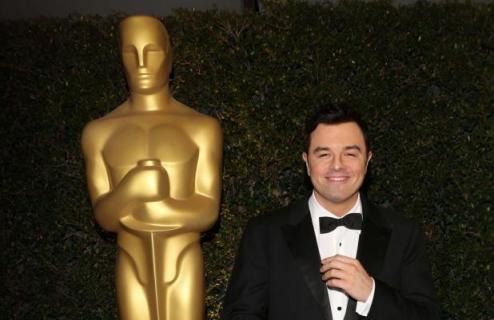 A popular and potentially controversial host and popular films in tight races should give Oscar a ratings boost this year.

The 85th Annual Academy Awards aired Sunday Night, February 24th, 2013.  Below were my predictions for the winners in the major categories.  The actual winners were filled in after the Oscars were announced.

Here’s hoping  first time host Seth MacFarlane treats the gig as if it will be his one and only shot and goes for the jugular.  Great mock-musical numbers seem inevitable, but his usual brand of gross and absurd insult pop-mockery comedy will more than likely be criminally toned down unless he adopts a devil-may-care attitude and taunts the producers.  I have a  hunch the guy will take things surprisingly seriously (with polished laughs and one or two insults that fall flat) and there will likely be far too many Ted gags.

With MacFarlane as host and an unusually tight race in some of the major categories, this could be one of the more interesting years to watch.  Argo seems the odds-on favorite despite some historical precedence working against it.  I still think Silver Linings Playbook could upset and score Best Picture and Director, but I’m not betting on it, and my heart belongs to Lincoln.  Best Actress and Best Supporting Actor are especially tough calls this year.

And now check out The Spin on my Predictions and the Winners:

Possible Upsets:  Anyone but the little girl

Possible Upset:  How to Survive a Plague

…and now on to the important stuff…

…the Rules for the 85th Annual Academy Awards Drinking Game:

Take a shot when:

Check out the winners in my annual alternatives to the Oscars, The Davies.

Enjoy! Wagering on the Oscars is encouraged. And please drink irresponsibly…I mean responsibly!