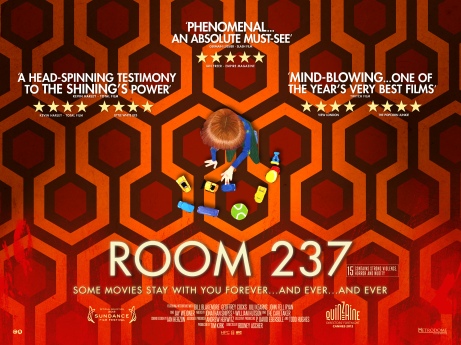 There are two things I watched as a child – that I probably shouldn’t have been allowed to watch as child – a special shout out to my mad cool parents, yo! – that I believe will stick with me forever…and ever…and ever. One is Twin Peaks. The other is The Shining. Oh yeah, and Fright Night. And that episode of Scooby Doo with the pumpkin-headed phantom. But seriously…about The Shining.

Like Twin Peaks it’s been an object of obsession for me. In Room 237, Rodney Ascher’s obsessive new documentary where half a dozen film nuts/Kubrick scholars obsess over every bit of minutiae in The Shining (check out all the stuff in the walk-in cooler at the Overlook…every brand name has a double meaning so sayeth them!), every cross dissolve (Kubrick dissolves scenes like Kapooya!), every continuity error (de-lib-er-ate they say!), there’s not a single theory presented that I haven’t heard before.

The Shining was actually about the Holocaust (the number 42 is quite telling…as is one cross dissolve of people into stacked luggage…and, you know, all that blood in the elevator)…no, wait…make that the American genocide of the Indians (think of the setting, and the set designs, and the back story of the hotel…and, you know, all that blood in the elevator)…no way…it was about how Kubrick faked the Apollo moon landing (duh, Danny’s wearing that Apollo 11 sweater, like, what did you think that meant?)…or…AHA! – it was about all of those things!