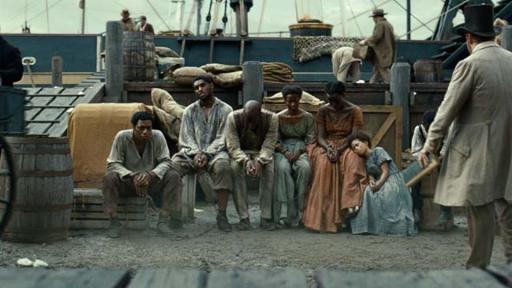 Steve McQueen’s searing cinematic treatise on slavery will never be accused of holding back.  Classically the film opens in medias res showing small moments in the life of a man enslaved that lead him to flashing back to an idyllic moment with his wife when he had been a free man.  McQueen’s confident direction and John Ridley’s assured screenplay move cleanly back and forth in time to tell the harrowing story of Solomon Northup (an amazing Chiwetel Ejiofor), an accomplished violinist from Saratoga, NY with a loving wife and children who is lured to the nation’s capital on the promise of work only to get kidnapped into slavery.  The horrors, violence and depravity slowly escalate during the film’s runtime, with McQueen transmitting the details through clever points-of-view and camera angles, focusing on the screams and faces of the victims until by the end of the film all blood and flesh are left pooling on the dusty ground of the plantation hellscape run with diabolical vigor by Master Epps (a blisteringly despicable Michael Fassbender, stretching his acting muscle yet again to its darkest reaches under McQueen’s insightful and uncompromising eye).

12 Years a Slave is simultaneously a harrowing one-man-survival-tale and a bitter pill of a history lesson that reminds us it wasn’t so long ago that an entire culture in the Southern United States believed with all their rotten hearts that it was their right to hold other human beings as property.  END_OF_DOCUMENT_TOKEN_TO_BE_REPLACED