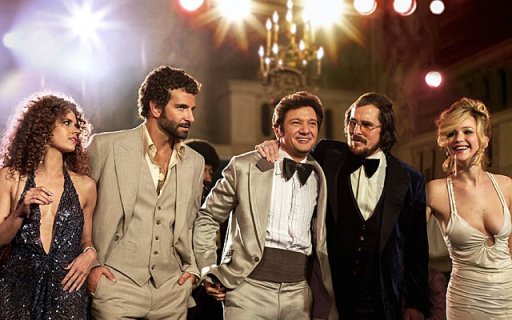 Irving Rosenfeld (an overweight and badly combed-over Christian Bale in total method mode) is a con man with a heart of gold from the Bronx.  He got into the con game as a kid as a way to help his dad’s glass business by breaking windows to drum up customers (awww).  He runs a series of dry cleaners while selling fraudulent knock-off art and running loan schemes.  He fell hard for a young passive aggressive sassy lass named Rosalyn (a delightfully scenery-chewing Jennifer Lawrence with full-on Long Island accent and big hair), married her and adopted her cute baseball card loving little boy (double awww).   But Irving can never show his true self and feels trapped emotionally and financially to his overbearing wife who uses the kid as collateral against Irving jetting off to fantasy land with his new red-headed saucy mistress, Sydney (a never sexier Amy Adams).  You see, Sydney is like Irving’s soul mate or something, a woman who reinvents herself to survive and is now his fully fledged partner in crime posing as a British Lady with banking ties to take the loan schemes to the next level.  This set-up is presented to the audience in crisscrossing voice-overs full of lies, back-handed insults and memoir-esque longing between Irving and Sydney, whose beautiful dry cleaning chemical soaked romance comes to a screeching halt when curly-haired hot-shot FBI Agent Richie DiMaso (Bradley Cooper, hilariously pent-up) entraps them.

And then the fun starts.  To get immunity, our lovers are forced to bring in more marks for take down to the feds.  And what starts out as “just take down four more guys” explodes with DiMaso’s wacky ambitions and crooked nice-guy Camden Mayor Carmine Polito’s (Jeremy Renner, doing a great South Jersey Italian accent) connections into…you guessed it!  ABSCAM!

Director David O. Russell and screenwriter Eric Singer play loosely with history, Boardwalk Empire style, with this fictionalized account of real events.  Heck, they even utilize Boardwalk Empire regulars Jack Huston and Shea Whigham in bit parts, along with a surprise cameo from Robert DeNiro in a nod to Goodfellas, a film this one emulates.  Everyone is conning everyone in one way or another as dysfunction, bad hair, good music, and desires for love and true friendship color and distort the characters’ motives.

David O. Russell has evolved into a true actor’s director, and the fact that just about everyone in the cast has worked for him before (and many in Oscar-winning or nominated turns) is a testament to the theory that he’s all about the performance.  His infamously volatile personality, yelling from the sidelines and passion brings out the best from his cast.  While the guys are uniformly great here, the leading ladies mop the floor with them.  Adams has never before been given the opportunity to relish in such a juicy leading role, usually regulated to the sweetheart or deceptively sweetheart supporting turns to woo the Academy.  Lately she’s been going darker places (witness her cold-blooded calculations in The Master) while still putting up that girl-next-door façade.  Here she’s able to morph the reality of her career turns into a fully fleshed out character who is constantly reinventing herself and gets so lost in her layers of cons neither she, nor we, know her true feelings which are transmitted through facial expressions, a look in the eyes, a slight snarl of the lip and smoldering body language that would make ear steam pipe out of any man’s spinning head.  Adams gets a lot of sexy banter and heated scenes with the leading men, but it’s when she squares off against Lawrence in the lady’s room at a swank party that we get the film’s one true barn-burner scene.  Lawrence is gifted with a number of great lines along the way, but it’s her frumpy house-wife sing-along to McCartney’s “Live and Let Die” after getting her husband in hot water with the mob scene that scores the film’s most potent gallows humor.

While David O. Russell is able to create those golden moments every thespian dreams of, he’s never been that good of a director from a technical and stylistic standpoint (though the set designers and costumers deck this one to the nines in period detail).  The sound design here is notably muted and poorly executed to the point that you can barely hear some of the dialogue in certain scenes.  This attempt at what I can only imagine an “au natural” sound sucks the energy out of the room.  There’s also always something off about the pacing and editing.  O. Russell fails to suck you in immediately, and it takes a good thirty minutes before you become accustomed to the pacing for the film to really start cooking…and it’s only really cooking because you have become invested in the characters and the acting.  There are also some scenes where O. Russell doesn’t seem to know where to put the camera or have the actors stand.  It always makes me wonder how many takes he does.  If the performance was spot on, he doesn’t seem to care what it looked like and he just keeps moving on.

Ultimately like all David O. Russell films this one is hugely entertaining thanks to the performances but missing that certain something to make it great.

In a bit of artistic irony (or perhaps self-awareness on the director’s part) there’s a recurring bit throughout the film where DiMaso’s boss (a perfectly cast Louis C. K.) tries to tell a story about ice fishing and his brother in order to impart a lesson to his over-eager protégé.  DiMaso constantly interrupts him because he thinks he knows where the story is going and just wants his boss to cut to the chase.  Each time, his boss gets more and more flustered, never finishes, and DiMaso’s interpretation of the lesson to be learned continues to evolve and reinvent itself.  The truth of the story (if there even is any truth to it) is never revealed.

It’s a perfect metaphor for a really good but somewhat frustrating film filled with so much great stuff – sometimes funny, sometimes tragic, constantly reinventing itself, with a lesson to be learned somewhere…but ultimately no truth is ever revealed even though, as the closing scene winks to the audience, the record keeps spinning.