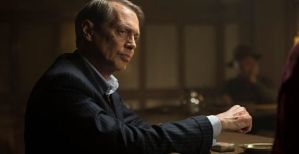 The Spin:  Coulter masterminded his best Scorsese impression, harkening back to the style of the Marty helmed pilot, with montages and narration and a tick-tock-gun-shot-gavel-pounding score accentuating this written-by-committee penultimate episode.  It was a refreshing and impressive piece of workmanship coming off the jaw-dropping events of the previous episode and the scattershot nature of the season prior to this.

AS ALWAYS, BEWARE OF SPOILERS:  The gang war between Luciano (Vincent Piazza) and Nucky reaches a fever pitch that results in the nabbing of Ben Siegel (Michael Zegan) as a bargaining chip.  Luciano one-ups Nucky, however, by nabbing Eli’s eldest son (Ben Rosenfield) in return.  A standoff ensues that leads to the demise of Mickey Doyle (Paul Sparks) and the Cuban henchman (Paul Calderon), and Nucky brokers an “on his knees” deal where he agrees to take out his partner (and Luciano’s last roadblock to complete East Coast domination) and offer up his entire empire for the safe return of his nephew (who Luciano also envisions using as a his “inside guy” in the District Attorney’s office).  Let’s not forget, however, even if this plays out to Luciano’s complete benefit, Nucky did have the insurance policy on Mickey and just put in a short-sale order with Margaret’s brokerage firm (advising her to do the same), so he might not be completely destitute.  Not surprisingly, despite the unfortunate turn of events, that kid claiming to be Joe Harper (Travis Tope) offers to stick around (“to sweep the sand” Nucky sarcastically and sadly suggests, just like he did as a child), to which Nucky responds by throwing money at the kid and telling him to get lost.

Meanwhile, the flashbacks carefully show how reluctantly young Nucky (Marc Pickering) was to offer help to the orphan Gillian (who they have done an excellent job with the casting of Madeleine Rose Yen, an actress who begs sympathy for her character, making Gillian’s fate and future deeds all the more tortured and tragic) despite Mabel’s (Maya Kazan) best pleas.  Even more reluctantly, he accepts his new assignment from the Sheriff to aid the Commodore in his “education of young girls”.  Of course, we know somehow, these two reluctances will converge in what the writers wish us to believe will be the defining moment of Nucky’s and Gillian’s lives.

The episode ends with the heavy pall of that knowledge weighing over Gillian’s (Gretchen Mol) voice in Nucky’s head as he reads the letter she wrote him from the asylum.  She’s begging for his help…again…one last time.  Can a gangster who just lost everything, and a former madame and murderess he set up for tragedy over thirty years ago, find redemption in the saving of each other?

Wait Until Next Week:  Looks like Capone is getting nabbed for tax evasion, and Luciano will not be happy to just let Nucky walk off into the sunset destitute and alone.  Will Joe Harper reveal his true identity?  And finally, it’s all been leading up to this: the flashbacks and the current events of the 1930’s are about to converge with the emotional collision of the show’s most twisted, fascinating, tortured souls.  What are you gonna do, Nucky?  Who you gonna save, Gillian?