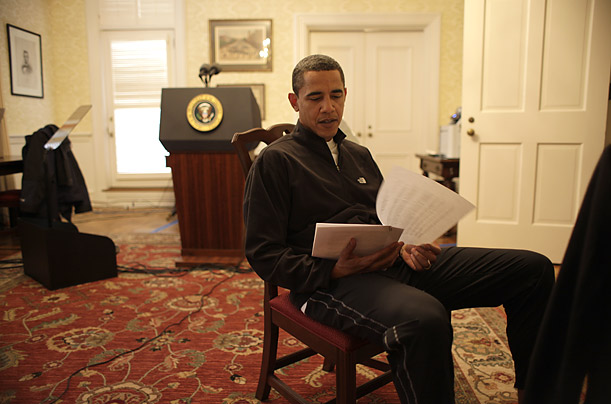 President Obama looks over the speech one last time to see if they can fit in any more allusions to Graham Greene or Terrence Malick to make Dave happy.

In the words of Bob Dylan, the times they are a changing.

It’s amazing what the other party regaining power in Congress and one rousing and comforting speech in the wake of a tragedy can do for a guy’s approval ratings.  After quoting everything from the Bible to the trailer for Terrence Malick’s The Tree of Life in his Tuscon Speech (which served as a Hail Mary pass that will be left hanging in the air until 2012), Obama looks to get back down to it with his highly anticipated and much ballyhooed State of the Union speech on Tuesday night, January 25th and 9pm EST.

Gone are the days of crazy-eyed blinking Pelosi, and now sitting next to Biden and his comb-over behind the President will be Sooki-colored blubbering Boehner.  Apparently out on the floor those kooky tea partiers, blue dogs, and bleeding hearts will be mixin’ it up, sittin’ all up in each others’ pieces singin’ kumbaya.  Ah, political theater.  Ain’t it grand?

All eyes will be on the Prez, and there ain’t nuthin’ to do in times likes these but get your drink on. END_OF_DOCUMENT_TOKEN_TO_BE_REPLACED