Those words are spoken by auto body shop owner and bank robber Robin (the superlative Ben Mendelsohn).  He’s the colorful character who gets all the best lines and spouts all the wisdom in Derek Cianfrance’s epic generational Upstate New York melodrama that spans fifteen years and is told in three parts.  He says these words to small-time hood, motorcycle carnival trickster, blue-eyed and tattooed baby boy Luke (Ryan Gosling – aka The Gos, in his wheelhouse) who Robin has recently taken under his wing for a couple of bank jobs.

And no words spoken were ever truer.  Luke has just found out that a former fling named Romina (a smoldering Eva Mendes who first appears on-screen in a t-shirt with no bra underneath like KAPOOYA!) had his baby – but she’s trying to move on, do right, and has shacked-up with a real man.  Robin convinces Luke that his particular skill set (riding fast) would be best suited for crime and that is the best way to win back his woman and provide for his family.  But even Robin knows there’s such a thing as riding too fast. END_OF_DOCUMENT_TOKEN_TO_BE_REPLACED 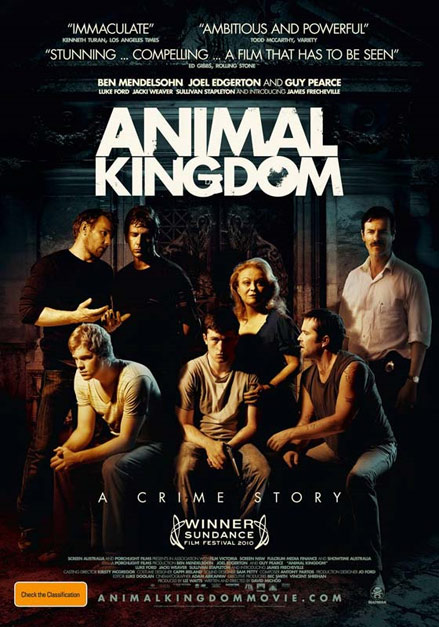 In the opening scene of David Michod’s Australian crime saga, Animal Kingdom, a Melbourne teenager named J (James Frecheville) sits stone-faced and clueless after his mom dies from a drug overdose.  After the police drag the body away, he calls up the only person he knows will come through for him, his previously estranged but all too willing to reconnect grandmother, Janine (Jacki Weaver in a performance that deserves awards’ buzz).  Janine just happens to be the proud and perky lioness ruling a family of small time bank-robbers and drug-dealers.  The eldest, “Pope” (Ben Mendelsohn) is a loose cannon on the cops’ most-wanted list.  J quickly gets caught up in the middle of a mess after the cops take out a family friend resulting in a gangland retaliation, and a detective (Guy Pearce) becomes determined to use the impressionable J against his uncles.

Michod weaves an intermittently compelling tale that is part coming-of-age story and part mob flick spun Down Under.  His framing and mise-en-scene is technically sound but sometimes too self-conscious, and the slow-paced editing makes the film seem longer than it is and hinders some of the drama.  END_OF_DOCUMENT_TOKEN_TO_BE_REPLACED