Here’s one of the many reasons why the brilliant Philip Seymour Hoffman will be so sorely missed:  his mere presence prompted other actors/actresses to up their game.  Case in point here in A Most Wanted Man:  the couldn’t be lovelier but normally vapid Rachel McAdams, shaky German accent and all, manages to actually make you feel for her troubled lawyer accused of being a social worker for terrorists.  What’s even more amazing is that in an adaptation of John Le Carre novel you actually feel anything for anyone!  With the emotional powder keg of The Constant Gardner being the exception to the rule, Le Carre’s spy procedurals are normally colder than an interrogation room metal tabletop.  Yet Anton Corbijn wisely allows his A-list cast to tap into the quiet, bubbling under the surface, heartbreak of this post 9/11 spy-eat-spy world.

Philip Seymour Hoffman is Gunther Backmann, a world-weary German intelligence station chief in Hamburg who was burned by the CIA at his last post in Beirut where assets were betrayed and lives lost.  He’s quietly been toiling away, utilizing McAdam’s liberal lawyer to reel in his minnow, a Chechen Muslim who entered Germany under cloak and dagger, that he hopes to dangle in front his barracuda, a renowned Islamic political activist and spiritual leader thought to be secretly funding a shipping company with terrorist ties.  He tries to keep the CIA, represented by a professionally flirtatious Robin Wright, at bay, while aided by his right-hand woman played with subtle skill by the fantastic Nina Hoss.  Willem Dafoe, meanwhile, plays a banker used as a pawn to channel the alleged funds that were left behind in secret by the Chechen’s recently deceased Russian crime lord father. END_OF_DOCUMENT_TOKEN_TO_BE_REPLACED 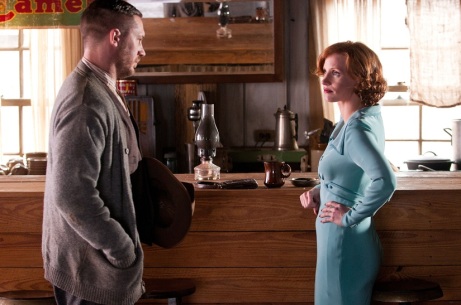 In Prohibition Era Virginia, in those verdant smoky hills of Franklin County, the bootlegging Bondurant Brothers are the kings of a moonshine ring operating peacefully with the local law enforcement and treated as legends by the townsfolk.  Oldest brother Forrest (Tom Hardy) is known for his stoic invincibility (he survived WWI and Spanish influenza), middle brother Howard (Jason Clarke) is a barely functioning drunk who wields quick fists of justice, and youngest sibling Jack (Shia LaBeouf) has been living in their shadows as the kid brother too afraid to take a stand or shoot a gun.  When a big-time gangster from Chicago named Floyd Banner (Gary Oldman) comes down into the area for business, Jack is in awe and sees it as an opportunity to recast himself as a savvy hot-shot.  But with Banner’s big business comes a new ruthless big city lawman, Special Deputy Charles Rakes (Guy Pearce) looking to break-up the Bondurants and their cohorts through any means necessary.

Lawless director John Hillcoat is no stranger to this brand of lawlessness.  His blisteringly violent and philosophical Aussie Western The Proposition was one of my favorite films of 2006.  He then went on to paint a lawless post-apocalyptic vision in his dour adaptation of the dour novel, The Road.  As with The Proposition, Hillcoat re-teams with screenwriter and musician Nick Cave, who adapted the story from Matt Bondurant’s own family history, The Wettest County in the World, while working again on the score with Warren Ellis.  END_OF_DOCUMENT_TOKEN_TO_BE_REPLACED

The Holocaust Presented as a Grim Children’s Fable, 14 November 2008

It’s official. The award now goes to the British for making the most depressing film I have ever seen. For the first time in my movie-going life I witnessed an audience member’s physical reaction to a film when a father was observed outside the screening room for The Boy in the Striped Pajamas collapsed against the wall with his child emotionally distraught and crying in his lap. With the rest of the audience, including myself, stunned into silence after the film and exiting the theater a communal internalized wreck, I don’t know if I was more devastated by what I had witnessed on screen or by that poor little child out in the hallway whose father for some reason thought this film would provide a history lesson his child could stomach at such a young age. As the film proves, the innocent are not cut out for war.

That being said, I would recommend The Boy in the Striped Pajamas to anyone emotionally prepared to sit through it. The film’s climax will hit you like a sucker punch to the gut…but there is a lesson to be learned for those in the right frame of mind and mature enough to handle it. In adapting John Boyne’s novel, director Mark Herman envisions the Holocaust as a grim child’s fable, and in doing so, presents the historical events from a daringly simple new angle. Yes, Life is Beautiful attempted something similar not so long ago, but that film was told from the point of view of a child-like man trying to shield his son from horrors and had abrupt tonal shifts that sank its dramatic impact. The Boy in the Striped Pajamas, however, keeps a powerfully consistent tone, and until the harrowing final act, is entirely told from the point-of-view of the young son of a German commandant assigned to run a concentration camp.

Herman directs the film fairly well, utilizing visual motifs and not so subtle foreshadowing (that left me with a sinking feeling in my gut as the film progressed), and he is aided greatly by the wonderful cinematography by Benoit Delhomme. The script, though contrived in parts, is tight and moves at a brisk pace, and the normally sappy composer James Horner shows great restraint with his score that is both haunting and reverent to the events that unfold. The mostly British cast is stunning. As little Bruno, Asa Butterfield successfully permits us to relate to the child’s naïve innocence without ever allowing the character to become cloying or blissfully ignorant. David Thewlis commands attention as his tortured and misguided father, and Vera Farmiga is dynamite as his distressed mother. She gives a powerhouse performance and proves yet again to be a gripping chameleon of an actress nearing the level of a Cate Blanchett.

With its slim run-time, The Boy in the Striped Pajamas seems a sound choice for a future generation of teachers to show their high school students in lieu of an epic like Schindler’s List. It also makes a good visual companion piece to Eli Wiesel’s literary Night as it shows a fictionalized flip-side to the same tragedy. As the real survivor accounts sadly fade with the passing of time, the horrors of the Holocaust will remain firmly in place in the world’s historical fiction for centuries to come long after the last person who actually witnessed it has died. These stories will forever be screaming at us, and we would be wise to listen. Fault the film if you wish, but in its bold child-like simplicity it shows the insidious evil of the Nazis as two-fold. Yes, they slaughtered six-million innocent Jews, but it was an act of murder-suicide as in doing so they also sentenced themselves to death.