Here’s a quick rundown on 2 flicks still in theaters (Magic in the Moonlight and Lucy) and 2 on Netflix (Blood Ties and Blue Ruin):

Magic in the Moonlight – Woody Allen’s latest is a postcard pretty period-piece set on the sun-splashed French coast and countryside.  Here a renowned magician (Colin Firth) travels to France at the behest of his friend to debunk an American spiritualist (Emma Stone).  The whole film, like Emma Stone (luminously photographed in classic Allen fashion to play up her best features – that red hair, those blue eyes, that mischievous smile) is ridiculously good-looking and light on its feet.  Stone soaks up the sun and Allen’s directorial affections, plumbing her plucky personality to its most glorious depths.  Her performance, which takes on the allure of a subtle silent film starlet, is almost transcendent.  The film, far from Allen’s greatest, is sill a pleasure to watch, and would’ve been forgettable if not for Stone’s classically styled star turn.  Word on the street is she’s signed up for another Allen flick.  Like her character, clever girl.

Bottom Line:  Spin once.  Watch out for Emma Stone’s next Woody.

END_OF_DOCUMENT_TOKEN_TO_BE_REPLACED 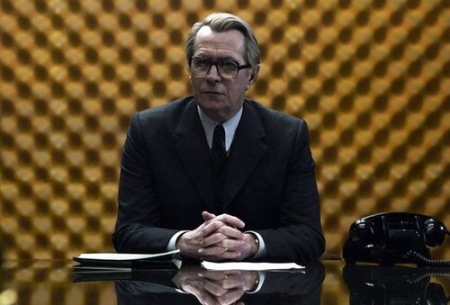 Is this the conference room at the heart of British Intelligence or a middle rung in Dante's hell?

During the height of the Cold War, a botched extraction in Budapest forces the head of British Intelligence (John Hurt as Code Name: Control) to resign, and “The Circus” goes through a house cleaning.  Not content with a forced retirement, veteran spymaster George Smiley (Gary Oldman, in a devilishly subtle performance) becomes determined to weed out the alleged mole at the top of The Circus.  It slowly becomes clear that Smiley is involved in a master chess game against a Soviet counterpart named Karla (who remains mysteriously just off-screen) – a man he failed to turn years earlier and who knows Smiley’s one weakness.  The biggest mystery isn’t the identity of the mole but which of these master craftsmen in the world of espionage is going to pull a check mate on the other.

Ah, John le Carre – no one does wearisome white-knuckle ennui quite like the anti-Ian Fleming and successor of Graham Greene in the foggy world of thinking men’s spy novels.  Think of this new film adaptation of his 1970’s classic, Tinker Tailor Soldier Spy (representing the code names given to those under watch) as The Usual Suspects for senior citizens.  END_OF_DOCUMENT_TOKEN_TO_BE_REPLACED

Character driven historical dramas used as vehicles for acting showcases have long been the bread and butter of many an Oscar campaign.  The King’s Speech is one such throw-back picture, harkening to a simpler time when entertainment was good and pure.  It’s 100% by-the-numbers bread and butter…but it’s that really good bread, you know the kind that is crusty on the outside and warm and tender inside, and the butter, it’s like that really fancy kind infused with garlic and stuff.

It’s the dawn of WWII in England, and the royals are still reeling from the Wallis Simpson scandal.  After his brother abdicates the throne, King George VI (Colin Firth – not looking, but certainly acting the hell out of the part) reluctantly takes charge while cowering in fear of a life-long stutter.  With the help of his wife, Elizabeth (Helena Bonham Carter, still damn good when not stuck in Tim Burton films) he finds an unlikely speech therapist in the Australian Lionel Logue (Geoffrey Rush in his wheelhouse) to help him overcome his stammering.  END_OF_DOCUMENT_TOKEN_TO_BE_REPLACED