The sound of a bleating sheep in the distance while walking a path up to a waterfall. I was on vacation in Ireland, on a day trip to Wicklow, and that sound…it haunted me. So I wrote a story about it called “Blue Heather.” I actually imagined a whole novel centered around the mystery in this story, but it remains as elusive as that sheep forever bleating in the distance.

Buy the paperback from Amazon for $9.99.

Download a copy to your Kindle for $3.99, or with your subscription to Kindle Unlimited.

Ask your local indie bookstore to stock their shelves through Indiebound.

Add And Then We Vanish to your Goodreads “Want to Read” pile. 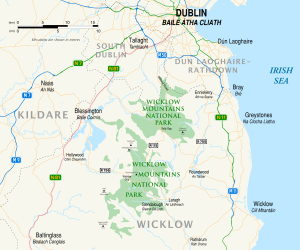 Ah, the Emerald Isle of rolling hills, bucolic villages and ancient ruins.  Away from the bustle of Dublin City, this is the Ireland most know and dream of visiting.

While visiting Dublin I took a day tour on a bus out to County Wicklow on a beautiful clear-skied sunny day (the only sunny day during my stay in Ireland) – the timing and weather was perfect.  Over the years I’ve become a mountains and lakes kind of guy…with upstate New York and western North Carolina being my favorite stateside haunts.  Ireland’s County Wicklow is like some fever-dream version of those verdant visions…the shapes more dramatic, the sheep fluffier, the lakes darker, the tall tales spun there taller, the ghosts older…full of something more ancient and fecund…and land so inspiring I couldn’t help but be touched as a wicked little short story (perhaps even a novella?) was born in my mind as I strolled the trails of Glendalough (which ooze a peacefulness coupled with that eerie sense of “other” hidden in the woods and the hills) and heard a stray sheep bleating unseen lost in some bush.  The monastic ruins in Glendalough (dating back over a thousand years) were like nothing I’ve ever seen in person and spoke of a thousand ghosts and stories.  It’s not surprising that County Wicklow has become a popular filming location with TV shows like BBC’s classic Ballykissangel and The History Channel’s The Vikings and films like The Quiet Man, Ryan’s Daughter, Saving Private Ryan, Michael Collins, Excalibur, Braveheart, and P.S. I Love You (whether actually taking place in Ireland or not) having made appropriate use of the photogenic environs.  Marvel at the mountains and lakes, the turf cutting through peat bogs and the trickling source of the River Liffey, and dream of all the stories told and untold that haunt the space. END_OF_DOCUMENT_TOKEN_TO_BE_REPLACED