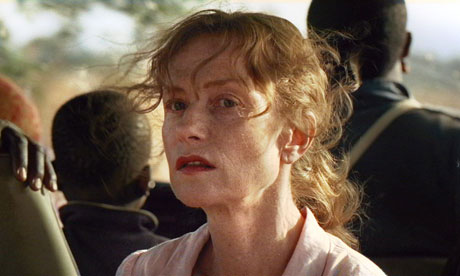 Would you like some coffee with your civil war?

Claire Denis is one of the most renowned and prolific female directors in world cinema, but her films are known by few outside of urbane critics and religious patrons of the art houses.  Her surprisingly heartfelt slice-of-life piece about multiethnic Parisians, 35 Shots of Rum, probably would’ve made my top ten list last year had I seen it in time and is a film that deserved a wider audience.  Her latest, the frustratingly non-humanist White Material, isn’t about to win over any new fans or stir up any kind of decent business.  But it will have plenty of people talking.

In an unnamed African country, civil war has broken out.  Isabelle Huppert plays Marie, a French woman who runs a coffee plantation and refuses to leave amidst the anarchy and danger, even after French soldiers beg her and her family to evacuate and all of her laborers abandon their work to flee.  Determined to bring the latest crop in, she hires a weary group of day laborers while her family falls apart and a notorious rebel leader, wounded and hunted, finds refuge in her home.

Giving the film no historical context is a bit frustrating, but Denis, who has her own tenuous ties to the continent, seems to indicate this could be “Anywhere Africa” and what she displays — the ailing after effects of colonialism, the brutality of civil wars, the inhumanity of using children as soldiers, and the rampant anarchy of a land full of “hot air” is a hellish portrait of her former home.

Anarchy — of the mind, of a nation, of a land — is the running theme of the film.  Denis begins the film near the end, and she inter-splices scenes that don’t make much sense until things come full circle.  Yet there is no conclusion, no pay off, simply an endless loop of suffering and madness we are made to not endure, but simply witness.  Similar to a Michael Haneke film, Denis does not always lay the motives of her characters out to bear (Huppert’s stubborn Marie seems to want to stay because she can’t show courage like this in France), nor (as seen in the lack of a historical context) does she care much about spoon-feeding a back story to her audience.  This can make it hard to connect with the characters and leaves a sense of vague foreboding hanging over the proceedings.  Sometimes I wished for a deeper connection to something.  But the richness of the film can be found in the immaculate mise-en-scence, the authenticity of the surroundings and the layered details found in the set designs and location shoots.  There’s also an atmospheric music score from Denis’ regular collaborator, Tindersticks, that sets a mood of unease and helps key scenes stick in your throat.  One eerily near silent scene, where soldiers bring about the demise of a sleeping brood of young rebels lost in dreams amongst the comfort of “white material” in Marie’s house, is a chilling depiction of the casual nature of evil.

Yet at the center of the film, holding everything in is Isabelle Huppert as Marie.  Her lazy and idiotic son has lost him mind, her dubious “husband” has been leading another life married to a native and trying to make shady deals with the local government, and the patriarch of the family is sick and dying and useless.  She takes on the role of a martyr and a universal “white mother” and she hangs on her bony frame unglamorous “white material” trying to foolishly prove to the land that she can survive it…she can rule it.  Huppert is all quiet tension and discontent, and there’s a bitter familiarity to watching her crumble to tears and then resort to violence in the end.  She’s destined, it seems, to be weak and caught up in the endless cycle of misery.

Claire Denis’ White Material is only for those with the patience to suffer through such a cinematic provocation.  There’s plenty to chew on, but few will enjoy the meal, and all will feel a little starved in the end.