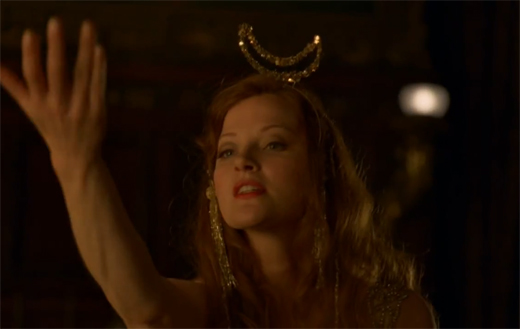 Gretchen Mol could give any man a stroke.

Boardwalk Empire – What Does the Bee Do?

The Spin:  Kornacki crafts a compelling hour built upon the themes of disillusionment and being put back in one’s place.  The show opens with the Commodore (Dabney Coleman) suffering a stroke at the height of lechery, leaving Gillian (Gretchen Mol), Jimmy (Michael Pitt) and Nucky’s idiot brother wondering what the heck to do now.  Meanwhile, Margaret gets disillusioned by Nucky’s cheerfully amoral politicking (“It’s about happiness” he tells her after deliberately publicizing a scandal with whores and votes so that he might get charged by the feds and then let off the hook by his old pal, the Attorney General) as well as by the attitudes of her servants.  Heck, ain’t nuthin’ a little cash stashin’ can’t fix, eh, old gal?  Meanwhile, it was a real treat to see Luciano put in his place by Rothstein (Michael Stuhlbarg), the professional businessman to Nucky’s professional showman.  And then we had ol’ Chalky White (Michael K. Williams) getting pressure from the widows of those who were killed by the KKK only to have Nucky tell him to be a “good boy” and wait for justice to be dispensed (again, we see Nucky promise to solve everything – with money).  Oh, that don’t sit well with Chalky, and he takes it out on his civilized family at the dinner table.  Lastly, Harrow (Jack Huston) provides Angela (Aleksa Palladino) with some much-needed artistic inspiration, leaving poor Jimmy to wonder if he’ll ever really understand any of the people he loves.  Things come full circle in the final scene where Gillian, disillusioned by having to play nursemaid to the Commodore, reveals in a fit of angry tears and powerful slaps, that she’s been giving a grand performance all along.

Calling Mr. Emmy:  Gretchen Mol owns the episode.  She knocks her transformation from the first scene to the last scene out of the park.

Wait Until Next Week:  Is this the end of the Commodore?  Is Philadelphia replacing Chicago in terms of big-city subplots?  Will we finally meet the infamous Waxy Gordon?  And that Philly butcher don’t seem right at all…

2 comments on “Boardwalk Empire: What Does the Bee Do?”