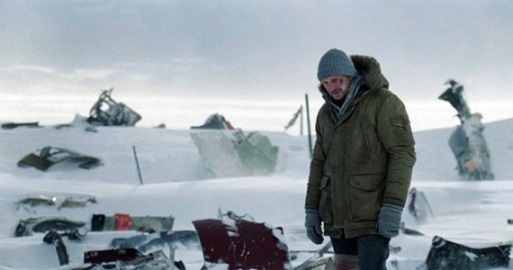 Shit...just when Liam Neeson thought things couldn't get any worse...he crash lands into the den of Sarah Palin's Alaska.

Man, Liam Neeson has the blues something fierce.  The poor guy has completed one of the oddest transitions of recent memory by going from Oskar Schindler to “Total Bad Ass” in films both criminally overrated (Taken) and glumly forgettable (Unknown).  Now in Joe Carnahan’s transcendent survivalist thriller, The Grey, Neeson plays a man named Ottway who is reeling from the kind of blues that lead men to self-inflicted gun shot wounds to the head.  The film opens grimly enough with Ottway working on an oil refinery as a wolf sniper in the remote Alaskan wilderness amongst men “not fit for civilization.”  He waxes mournfully in voice-over about being separated from his wife (presented to the audience in smartly lit, intimate Nolan-esque slivers of memory) and working “a job at the end of the world.”

One night he walks out from the rowdy violence of the camp bar into the snow to blow his brains out – but then he hears the ghostly howl of those beasts he’s been paid to study and control.  He can’t help but wonder if maybe he belongs out there – like the wolves – a stalker – a survivor.  He posits himself as much against Mother Nature as he is against his own nature.  These opening moments offer the viewer the type of emotional and philosophical trappings not usually found in your typical Hollywood product – especially thrillers of this sort.  With the help of his resurrected from the doldrums director, Carnahan (who finally fulfills the promise he showed in Narc after years of wallowing in the mediocrity of La La Land), Neeson completes his evolution as an actor through Ottway.  Here we finally have a character who marries the gravity of an Oskar Schindler with the gruff bad-assery of Neeson’s more recent commercial incarnations.

Of course the bulk the of the film concerns Ottway and his motley crew of cohorts surviving a horrific airplane crash on their way to Anchorage only to be stalked through the frozen wilderness by a pack of ravaging and unmerciful wolves.  But it returns from time to time to those small moments and to the epic human pondering on live and death.  Carnahan, doubling as the screenwriter along with Ian Mackenzie Jeffers (upon whose short story “Ghost Walker” the film is based), reveals just enough back story for each man struggling to survive to make the viewer care about whether or not they make it out alive.  As for as the cast – Frank Grillo as the ex-con Diaz and Dallas Roberts as the thoughtful dad Hendrick emerge as the standouts.  Meanwhile, the wolves too become a character – cunning and plotting against the men in a fierce battle of wills.

At times the premise seems almost absurd, but Carnahan applies a gritty realism to the proceedings making you feel like this could really happen and engendering moments of honest thrills and surprises that will leave audiences cringing and gripping their seats in ways horror filmmakers could only dream of.  I imagine everyone will have their favorite moment of nerve-shattering tension – but mine was when I saw a common nightmare of mine come to life on the screen before me as the character played by Dermot Mulroney lost his glasses to a ravine while trying to overcome his fear of heights and hanging off an unstable rope-line.

Meanwhile, cinematographer Masanobu Takayanagi makes great use of the bleak but dreadfully beautiful and expansive Alaskan landscape, building suspense through carefully crafted shots of hills alive with the sound of wolves howling (ahh…as Dracula would say, “The children of the night…what sweet music they make!”) and darkness filled with the chilling glow of predatory eyes.  Again, a sense of great realism is applied to the animatronic wolves, where if there was any CGI used to create them, it was impossible to tell where.  They look and sound real – and the menace they create is haunting.  Marc Streitenfeld’s minimalist music score only heightens the mood.

Still, all of these great elements only come full circle as part of Carnahan’s overall craftsmanship and the perfect casting of Neeson who delivers possibly his greatest performance ever.  When the wolves first begin attacking, Carnahan edits the scenes with slip-shod hand-held brutality full of grunts, guts and blood.  But as the film progresses, he pulls back – and just the mere movement of the camera panning in behind a man’s head as he stares out into the wilderness and some rustling of paws can be heard off-screen is enough to elicit gut-dropping dread without ever showing a drop of blood.  It’s in these moments where you realize the filmmakers have you by the throat – you’re so emotionally invested that the as advertised “money-shots” have been replaced by your own fear over what you don’t see.

Likewise – Neeson pulls back his performance as well – generating nervous laughter early on when he first takes charge of the survivors and tells them with brutal honesty how things are going to progress only to remind us in the end of the deep down spooky kind of blues he’s suffering from merely through the look in his eyes.  You don’t realize the true depth of Ottway’s suffering and the crippling fragility of his emotional state until the very end, in a beautifully judicious revelation through flashback before an ending that left the entire audience frozen to their seats.  Buzz must already be spreading – for not a single person left while the credits rolled.  And trust me – you will want to stay until after the credits.

With the familiar backdrop of man vs. nature and survival of the fittest, The Grey is a “man’s man” film rife with raw emotion and the visceral brutalities of human existence.  But it also delicately dances with grand themes concerning the cruelty of Mother Nature vs. the imprisonment of one’s own mind.  As such it echoes a wide variety of past audience favorites like Jaws, Braveheart, The Shawshank Redemption, Gladiator and even Memento.  Time will tell if it resonates as a classic for years to come…but if my gut reaction tells me anything…I’m not the only one who loved every minute of it.  I imagine that some of the audience members I saw it with still haven’t been able to peel themselves from their seats.

9 comments on “The Blues and The Grey”