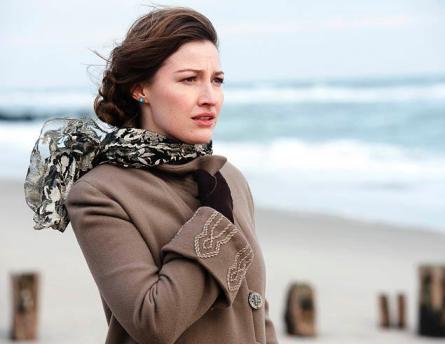 No wonder Margaret dreamed of flying away in the season premiere.

The Spin:  If last week’s episode was meant to show the softer side to these tough guys, tonight’s episode existed to remind us of the deep-seeded depravity of the male characters as manifested through their misogyny and repeated degradation, oppression and violence against women.  Out in Cicero, the Muller formerly known as Van Alden (Michael Shannon), can try as he might to be a simple family man, but his violent past is infecting his sweet Swedish wife’s emotional well-being, leading to a shocking turn of events that has Muller running back to the Irish mob-run flower shop.  Back in AC, Poor Gillian (Gretchen Mol) still can’t come to terms with Jimmy’s fate and refuses to have him declared dead – the only action that will leave her with any title or credit to fix-up her house of ill repute in ill repair.  Nuckster, meanwhile reeling from a breakup with Rothstein (Michael Stuhlbarg) over the incompetence of the Jersey operation, can’t help but meddle in Billie’s career, desiring to control her destiny even while he tells his wife, Margaret (who learns tonight of the affair), that the young lady seems more than capable of taking care of herself.  Then there’s Gyp (Bobby Cannavale – revealing way too much tonight), taking the cake for most disturbing fetish (a title previously held by Van Alden), making a new deal with Rothstein that leads to a bloodbath leaving a nameless red-headed waitress naked and dead.  And all of this makes what had been Margaret’s previously boring story-arc concerning the opening of a women’s clinic finally carry some weight.

Here is a woman living in a world of decadence covering up filth, corruption and the complete disregard for the fairer sex taking a quiet but firm stand against the status quo by desiring to educate women about their own bodies and their own destiny.  Suddenly Margaret (Kelly Macdonald) is interesting again.  Meanwhile in the closing scene the cute little twit Billie Kent (the overly lovely Meg Steedle) hears for the first time the name of the last aspiring actress Nucky left on the side of the road like a piece of trash – Lucy Danzinger.  And the “violence” against women comes full circle, my friends.  Rinse, recycle and repeat…or be like Margaret and try to do something about it.

Plotline Where I have No Idea What is Going On:    There’s a character played with despicable southern gentility by Stephen Root involved in big-time corruption, but for the life of me, I can’t find a reason to care about what’s going on at this point.

Wait Until Next Week:  Looks like Gyp is going to make things personal.  And Margaret wisely starts packing heat.