Boardwalk Empire: A Man, A Plan… 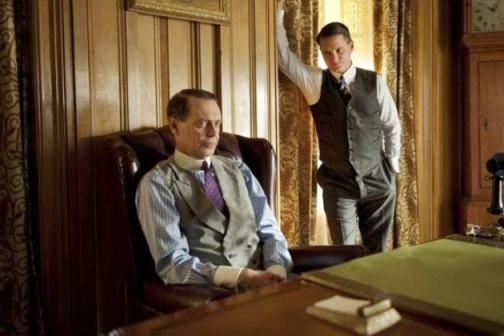 The Spin:  A man a plan a canal panamA…frontwards or backwards…the fate of those on the boardwalk is the same.  Not a single plan went down as planned…from Means’ double-dipping hit-turned-suicide (with Stephen Root giving a delicious performance), to Nucky’s attempt on Masseria (Ivo Nandi) involving Owen (Charlie Cox), to Owen’s own plot to flee to St. Louis with Margaret (Kelly Macdonald).  NOTHING went right.  No matter who the man or what the plan, in this world, people’s fates are sealed by the beds they’ve made and now have to lie in with the evil beside them.  In the shadows,  Gyp (Bobby Cannavale) was Gyp (and continues to find creative ways to kill those who offend him), the Muller formerly known as Van Alden (Michael Shannon) saw his decent into private Norwegian bootlegging lead to a brush-up with Al Capone (Stephen Graham), and Chalky (Michael K. Williams) gets rebuffed for trying to open a new club.  Women’s rights and minority rights mean nothing when bottles of (symbolic) poison wash up on the pristine shores turning everyone into smiling or hysteric drunks.

And yet in this criminal cauldron of greed and despair, hope and goodness fight to shine through…from Margaret’s crusades (now mired by – SURPRISE! – her own misbegotten bun in the oven) to the burgeoning love between Julia (Wrenn Schmidt) and Harrow (Jack Harrow) – two lost souls grasping for something true and pure.  Someone has to break free of the chains of bondage on the boardwalk…someone please…HAS TO MAKE IT OUT ALIVE.

Meanwhile as dead lovers are shipped home in boxes and human heads are turned into mush on the beach…the audience waits with bated breath.

Things Learned This Week: Don’t open up a special delivery at four in the morning.

Wait Until Next Week:  Can things get any stickier for Nucky?  Will Van Alden realize the importance of his new ill-founded position?