Life in the Key of Malick in To the Wonder

I could’ve done without the “the” in Terrence Malick’s latest cinematic symphony To the Wonder.

…that is what Malick’s life as an artist has been all about. To wonder…what it’s like to kill for the heck of it (Badlands)…to love when life is like a shaft of wheat blowing in the wind (Days of Heaven)….to wonder what it’s like to kill someone and mean it, to live
and love in war (The Thin Red Line)…to wonder what it was like to discover a new land, a new love, a new way of life (The New World)…to wonder about the beginning and end of time and the loss of a loved one (The Tree of Life).

To the Wonder is a meditation on loneliness.

The loneliness of a French woman in Oklahoma (Olga Kurylenko – picture perfect and boiling beneath the beautiful seams) brought to the States by her vapid American lover (an obnoxiously cast and clueless Ben Affleck). But wait…the vapid Abercrombie beefcake who stole the heart of this French beauty is lonely too…wistful for a lost love (the never more beautiful Rachel McAdams, wonderfully subdued and lovingly photographed)…and she is lonely herself because she lost a baby girl. And then there’s the Spanish-speaking priest (Javier Bardem, appearing as if he was exorcised from the long-lost film translation of Graham Greene’s The Power and the Glory) lost in an epic white trash fantasia attempting to heal the community while questioning his faith and place in this world. 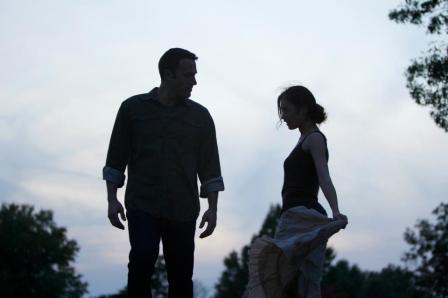 Malick and cinematographer extraordinaire Emmanuel Lubezki find beauty in the white noise of life…whether it’s the streets of Paris or the industrialized rural mecca of Midwestern America…the film is lost is the loneliness of beautiful everyday spaces.

None of this is transmitted to the audience in clarity…it’s all mood…shapes and shadows and voice-overs. “Will you pray with me?” the former sweetheart asks her dim lover…asks the audience…but Affleck responds for us all in shocking alacrity …”I had no faith…you knew.”

In Malick’s world the grass is always so high…the light so perfect…the loneliness and beauty of it so all-encompassing. His camera is so fluid…as every film he’s ever filmed reminds us with images of water flowing over rocks and sand and time…and time passes in To the Wonder. It’s a wonder it ever finishes…because as the music and imagery wash over you like that water over the rocks and the sands…you find yourself stuck…wondering…what does it all mean?

In To the Wonder people fill their loneliness with affairs…children…religion. The holes in their hearts are so big it empties entire homes…communities.

Roger Ebert, in his last published review wondered…”Why must a film explain everything? Why must every motivation be spelled out? Aren’t many films fundamentally the same film, with only the specifics changed? Aren’t many of them telling the same story? Seeking perfection, we see what our dreams and hopes might look like. We realize they come as a gift through no power of our own, and if we lose them, isn’t that almost worse than never having had them in the first place?”

Malick when left to his own devices will produce a symphony whether you like it or not. In Olga Kurylenko…a Russian model turned Bond girl turned actress playing a French woman lost in Oklahoma…he found a singer for the ages.

Don’t muffle her voice with you preconceptions. Don’t silence a master who has painted a portrait of loneliness only the coldest of hearts couldn’t find solace in. Do you have to be on your death-bed to wonder about the beauty of art…of life?

I hope not. For if so, then we are in a darker place than even Malick could imagine.

What’s a Malick film without the chatter?  Here I wrestled the best from the blogoshphere: