Well, after every hot streak, there’s a cold spell when it comes to movie viewing. After the cinematic nirvana that was the fearsome foursome of To the Wonder, The Place Beyond the Pines, 42 and Mud…I got lost in the boredom of The Reluctant Fundamentalist, Iron Man 3 and Wuthering Heights. 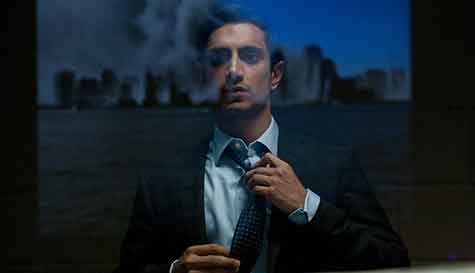 A mirror with no depth.

For a film that is purportedly about SO MUCH, Mira Nair’s mostly inept The Reluctant Fundamentalist fails to shed any depth of light on current geopolitics, the American Dream, East vs. West or terrorism in our post 9-11 world. There are the seeds of a good film here, but nothing is fleshed out sufficiently. There’s some good acting (Kiefer Sutherland is especially effective as a Bain Capital-style Wall Street exec) and some god-awful acting (Kate Hudson delivers possibly her worst performance, all quirky mannerisms and crocodile tears) – but it all amounts to a big shrug of the shoulders and sleepy eyes. Nair’s career has been in a downward spiral since Monsoon Wedding – her films now shed of all her signature cross-cultural color, class clashing and heart. It’s shocking to watch this film and think that this was made by the same director of Salaam Bombay.

It’s nice to see RDJ talk shit to a kid in IRON MAN 3.

Meanwhile, to call Iron Man 3 boring is a bit unfair. I was entertained for most of its runtime as this was probably (and thankfully) the funniest film of the series with some really great dialogue for Robert Downey Jr (and one particularly mean-spirited jab at a kid that had the audience howling) and (SPOILER ALERT!) a hilarious performance from Ben Kingsley. The acting here was all around swell, especially Guy Pearce who has become really good at playing dastardly fellows in his middle-age.

Like all comic-book fanboy extravaganzas, though, this film pummels you with CGI effects and over-the-top set pieces…some of which are fun…and some of which lulled me to near sleep. I also instantly forgot the film until I tried to drum up some memories to write this paragraph. Such is the stuff of summer popcorn blockbusters.

After Iron Man 3, I watched on Netflix the umpteenth adaptation of Emily Bronte’s Wuthering Heights in an attempt to find some literary substance. Director Andrea Arnold (of the devastating Red Road and the riveting Fish Tank) is like a cross between Susanne Bier and Paul Thomas Anderson. Gone is the frame story of the novel, most of the second half, and all of the supernatural elements. She strips Bronte’s tale to its withering bones with shaky hand-held camerawork, gritty realism and relentless wind, rain and cold engulfing the heights. It’s an interesting conceit, until you realize it distances you from the characters and Arnold makes the fatal flaw of shooting the haunting scenery with a 4:3 aspect ratio which makes you think something infinitely more interesting is cut from the frame on both sides. Arnold has crafted an interesting film…but again…any substance seems to have been blown away with the wind over the hills.

6 comments on “Scaling the Wuthering Iron Heights of Fundamental Boredom”