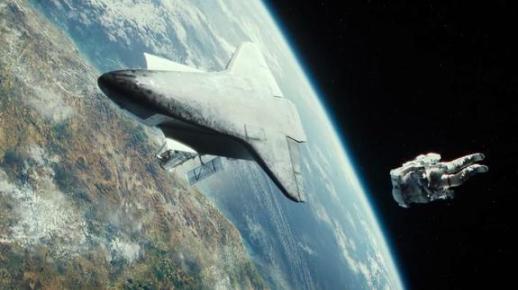 GRAVITY’s stunning opening sucks you in.

The film opens with a spectacular continuous long shot of planet Earth from outer space.  Slowly we begin to hear the static-laden chatter of astronauts and mission control grow louder and clearer while the camera leisurely pans in closer and closer to those working outside of a shuttle docked at the Hubble Space telescope.  First-time space traveler, Dr. Ryan Stone (Sandra Bullock) is installing a new scanning device to give NASA a better way to watch the skies in deep space.  Longtime astral cowboy Matt Kowalski (George Clooney) is out for a “Sunday drive” around the shuttle and telescope overseeing things while telling tales and keeping things light with mission control.  But then a frantic warning comes from Houston.  Stay calm.  Get back inside.  The Russians have taken out one of their own satellites.  The debris is traveling high above the globe at breakneck speed slamming into other satellites and anything in its way causing an avalanche of deadly metal to come hurtling right towards our dear crew.  Suddenly, in the vast distance of blackness above a blue and white sphere, the debris is coming into view.

The next ninety minutes become an epic cosmic ballet of white-knuckle suspense, eye-popping visuals and ensorcell acting.  Shot in 3D, the photography of Emmaneul Lubezki (who previously luxuriated in the magic of the cosmos in Malick’s The Tree of Life) is wholly immersive under Cuaron’s self-assured direction.  Cuaron spins his Oscar-winning mega stars through the calamities like a choreographer or puppeteer without strings.  There’s not a single moment in the film’s airtight run time where the director isn’t in complete control.  Cuaron, who has for years been honing his craft and solidifying his status as the best director yet to make a great film, has finally done it.  But he hasn’t just created a great film, he’s surpassed every expectation we have of our autuers and delivered what comes across as a flawless cinematic exercise that holds the audience in its pull for every second.  The way Cuaron and Lubezki move the camera and alter POV’s, from wide shots of ramshackle stations hovering over the immense world to the extreme intimacy of being inside Bullock’s space helmet as she tumbles like an acrobat into the darkness, gives the illusion of being right there in the thick vacuum of space.

There’s not one element that hasn’t been executed with the greatest of care, from the seamless special effects to the judicious editing to Steven Price’s low-key but evocative score, which hints at the most intimate notes from a Hans Zimmer chorus while holding back until the film’s final cathartic moments where it releases an epic swell.  Price’s music is expertly woven into the sound design which is painstakingly orchestrated to create tension, while the production designers carefully place objects of heavy symbolism (notice the items floating inside the stations…the rook chess piece, for instance) amidst Cuaron’s and Lubezki’s transformative photography (take note of how they frame Bullock’s body as she takes a brief moment of rest after getting through the airlock and wrestling out of her constrictive suit).

Alfonso Cuaron and his son Jonas anchor the script with big themes about letting go and metaphorical rebirth.  If there is one false note, it might be the surface level self-help dialogue that occasionally makes its way into the storytelling, but it’s easily forgiven when spoken by two stars in complete control of their craft and set against such a magnificent awe-inspiring backdrop.

Clooney has become a master at playing likable variations of himself, always charming, always in control, stubbornly heroic.  His soothing voice anchors the drama and allows the viewer to take a deep breath in the quiet moments between the melee.

Bullock gives the performance you didn’t know she could give.

Meanwhile, it is Bullock, who shockingly so, owns the film.  Hers is a physical and demanding performance requiring primeval emotion the likes of which I never thought she could display so effectively.  It actually helps that she has the stigma of America’s Movie Sweetheart, as she innately uses that to her advantage – nobody wants to see poor Sandy get hurt – but she bursts through that mirage showing she is an actress of immense range who can physically throw herself into peril for the sake of art.  After the film, I racked my brain to imagine another actress who could’ve pulled it off.  More consummate thespians like Cate Blanchett would’ve cracked under the physical demands, while someone like a Charlize Theron would’ve pulled off the physical aspects while rendering the emotions cold.  Only perhaps Naomi Watts (who has battled Hollywood delusions, a giant ape, cholera and a tsunami) could’ve stood in, but even then…in some ways…without Bullock…it might have been a different film.

I won’t spoil it, but I ask you to think about this after you’ve experienced the film.  Could it have been anyone else in Cuaron’s final mythic moments other than Bullock?

Gravity is an explosive conflagration of stars, in every shape and form.  And Cuaron has found a way to wrangle them all into a giant symphonic rodeo of sights, sounds and emotions, thus creating the grandest cinematic entertainment witnessed in many moons.

10 comments on “The Perfect Pull of Gravity”