Intimacy, Technology and Social Media in The Circle and Her

In Dave Eggers’ new novel, The Circle, young, impressionable and lonely Mae Holland lands a dream job with a utopian posh social media tech company thanks to nepotism.  There she becomes fully immersed in her new work, which turns out to be so much more than just another job, it’s a way of life…and Eggers’ quasi-futuristic look at a corporation-as-religion is both humorous and horrifying.  The Circle, like some parasitic mash-up of Google, Amazon, Twitter and Facebook is hell-bent on creating a world of complete transparency where cameras monitor everything, and every thought or notion that pops into someone’s head is shared ad nauseum on its social network.  The intentions seem noble – education through access to every piece of information available, surveillance as a way to deter crime, and transparency of governments to create a true global democracy.  But The Circle soon becomes a monopoly bending the populace and world governments to its will under the guise of this being the will of the people who champion The Circle’s causes through “Likes” and sharing.  It quickly becomes obvious that not everything should be known.  Eggers seems to be saying with this cautionary tale that there’s value in mystery and privacy is still a right.

Mae, unfortunately, falls head over heels for The Circle, and her connection to the corporation goes from whirlwind romance to abusive relationship.  She can’t seem to break herself from this way of life even as she witnesses the destruction of friends and family.  Eggers describes moments where Mae gets a certain “high” from posting, pinging, and liking across The Circle, where there’s a feeling of euphoria mixed with exhaustion.  Yet in the corner of her mind she sees a tear in the universe opening up that seems poised to swallow her into utter darkness.  And that’s what all this interconnectedness is…a black hole where synthetic moments take the place a real emotions and connections. 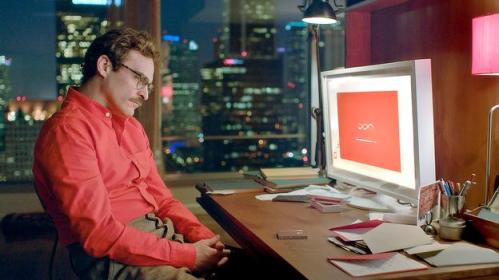 Eggers’ vision could take place in the same universe as Spike Jonze’s latest and Academy Award nominated film, Her.  His protagonist, Theodore (an awkwardly charming and sad-sack Joaquin Phoenix), seems like the type of guy Mae Holland would date, and The Circle the type of place he might work.  But in Jonze’s universe, Theodore works at a company where he ghost-writes handwritten letters – synthetic pages of falsified emotions – and he’s fallen in love with his new state-of-the-art and self-evolving Operating System named Samantha (voiced by Scarlett Johansson, who gives a breathy and compelling performance without ever appearing on-screen – something that I initially thought of as a crime on Jonze’s part but actually works quite well).  The relationship he forms with Samantha bears a resemblance to something organic, but it, too, is synthetic and ultimately empty, though Jonze and his cast give it their all to convince us otherwise.

Like the world Eggers creates, Jonze writes and directs a quasi-futuristic world (where a beautifully photographed Shanghai doubles for an ultra modern Los Angeles) that is eerily like our own and seems all together possible given the present course of technology and social media and how that is coming to define intimacy and our relationship to ourselves, to each other and to the world.  And like Eggers, Jonze strikes the strongest cord when he goes for societal satire.  People dating OS’s becomes a “thing” people buzz about, and there’s a hilarious bit where Amy Adams’ character tells a story about one particular OS that started cheating on its owner.

The film is tinged with moments of humor, beauty, sadness and fragile emotions.  Just as Eggers’ social network becomes the ultimate form of ego boosting, so does Theodore’s relationship with Samantha and Samantha’s relationship with Theodore.  He’s using Her to fill the emotional void in his own universe, and though he pretends she’s an authentic romantic partner, there’s the sense that he “owns” her – she’s His OS and His OS only.  On the flip side Samantha is using him as a way to learn about the world…to learn about love…and what more egotistical romantic notion is there in pop culture today than the idea of an artificial intelligence that is so desperately obsessed with trying to learn what it means to be human?

Unlike Eggers (whose novel falls down a rabbit hole where he offers no alternatives to the world The Circle demands), Jonze never explores the global dangers of a world with self-evolving OS’s and a populace totally reliant on them, and instead only goes as far as matters of the heart, which perhaps for Jonze is all that matters.  For all its poignancy and imagination, Her is psychologically shallow and falls all too comfortably into the tropes of the modern-day romantic comedy:  boy loses girl, gets depressed, meets new girl who changes the way he looks at the world, loses that girl to her own personal evolution, and then ends up with the friendly girl he should’ve been with all along.

It’s all a bit silly.  But when they’re not succumbing to their own mechanisation, both The Circle and Her offer bountiful food for thought and fly caution flags over our increasingly, and sometimes dangerously, interconnected world that would seem lost without the technology that has synthetically tethered itself to our collective hearts.