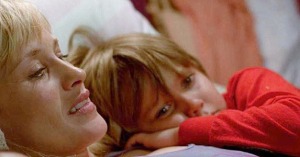 There have been those who have proclaimed Boyhood the greatest film of the 21st century.  And there’s a huge faction that believe it’s Richard Linklater’s magnum opus.  Though surely a 2014 Top Ten contender, I’m not even sure it’s the best film of the year thus far, and the Before- trilogy is still Linklater’s crowning achievement in my mind.   I suspect there’s been a bit of the old Group Think at work in delivering this hyperbolic praise.

Filmed over the course of twelve years with the same four leads (two adults – Ethan Hawke and Patricia Arquette, and two children – Ellar Coltrane and Lorelei Linklater) meeting with the writer/director to riff for a few weeks at a time in his sprawling Texas homeland, Boyhood is wholly original in its depiction of the passage of time and aging in the context of a singular work of cinema.

The early years of Mason’s life are depicted with an easy flow and are full of humor and charm.  The kids are naturally cute and precocious, and the director obviously had a blast letting his own daughter cut loose, gifting her classic sassy little girl lines and mannerisms that seemed organic.  I’ve heard him joke in interviews that Lorelei cast herself as soon as she found out her dad had written the role, and based on what is seen on screen in these early scenes, I reckon it’s a true story.  Meanwhile, Mom and Dad aren’t together from the onset, and while they have their own sets of problems, both Hawke and Arquette are so effortlessly likable, you instantly root for them to get their shit together…not so much for the kids’ sake, but for their own.

As the film moves into middle childhood and the teen years, it starts to plod a bit, and some of the clichéd and overwrought plot mechanics Linklater uses (Doh! Mom marries not one, but two alcoholics!) take away from the film’s realism.  It seems to get stuck there in middle school, but before we know it, Mason is a moody, mumbling high schooler…until he starts to drink and try soft drugs where Linklater attempts to recapture some of the old rambling magic that made the aimless philosophy of Slacker, Dazed and Confused, and Waking Life so enjoyable.  There are times, though, Mason comes across as so lackadaisical you want to shake him to wake him up.  He never really stands up for anything, though he does lash out eventually at stepdad number two to get off his back, and he does take a shining to the art of photography.  Linklater comically channels this feeling of wanting to shake (perhaps shape?) his protagonist through pep talks from his photography teacher and first boss (at least the kid gets a job much like I did at that age as a busboy/dishwasher with fry-cook aspirations).

The film is at its worst when Linklater insists on time-stamping moments with near constant nods to pop culture, technology and occasional partisan politics.  It sometimes seemed obtrusive and unnecessary (the Harry Potter sequence could’ve been completely exorcised) and often took me out of the moment or disrupted the flow of the film, though I enjoyed the philosophical Facebook whining because it at least fit into the personality Mason was experimenting with donning.  While the younger generation that documents their lives digitally this way and lived parallel to these moments might find the time-stamping more meaningful, I felt it robbed the film of an opportunity for some sense of timelessness and Mason being the “everyboy” archetype.  There are other awkward moments conceived with a good heart that come across as forced, like the later restaurant scene where someone from the periphery of Mom’s past comes up to thank her for the apparently life-changing advice she casually gave him in an earlier throw-away scene.

The film is at its best, however, when Linklater allows ample time for his main characters to breathe and just walk and talk.  In the scenes where Dad is trying to connect with the kids, and especially in his one-on-one time with Mason doling out advice, Ethan Hawke is at his Ethan Hawkiest channeling Linklater’s great writing, and the realism captured here feels as right as it did in the Before- trilogy.  And while Hawke gets the best elongated scenes, Arquette gets the most poignant lines.  Her character feels the most fully fleshed out, and it’s fascinating to watch Arquette come into her own over the course of the epic filming, emotively as an actress, and physically in her graceful aging.  At one point, after ripping the kids from an abusive home only to have her petulant daughter complain about changing schools, she yells, “I’m doing the best I can!”  You believe it.  And then near the end, musing on an empty nest and the passage of life’s milestones, she breaks down while Mason is packing for college and cries, “I thought there would be more than this.”

That heartbreaking line defines the experience.  In his attempt to depict the most realistic facsimile of an ordinary boy’s life, Linklater sequesters himself and his characters in a world where there is nothing more beyond the ordinary (though there’s plenty of juvenile musing on the fantastic).  You feel for Arquette’s character when she says it, and in proper meta fashion, I the viewer, was left wondering the same about the story.

Linklater refreshingly ends the film in true Linklater fashion with Mason and some new college friends wandering harmlessly stoned through the beautiful Big Bend national park.  There Mason muses with a cute girl about the moment – and we realize, with a melancholic sigh, the moment where there is something more than this is a moment we won’t experience in this film.  Just like life, I guess.