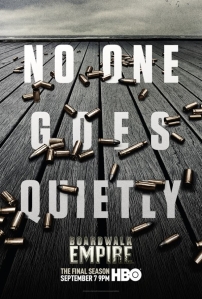 The Spin:  The final season opens with the haunting Gretchen Mol reading a voice-over from the children’s periodical “Golden Days for Boys and Girls” where she’s seemingly telling the young lads we see diving into ocean after coins, “Be honest and true boys!  Whatever you do boys, let this be your motto through life.”  A moving flashback to Nucky’s hardscrabble childhood in 1884 Atlantic City (which was merely a pier and one Corner Hotel on a tiny boardwalk) is expertly interwoven into a flash forward to 1931, where will the help of the effervescent and ever-saucy Sally Wheet (Patricia Arquette, all bosoms and moxy), the Nuckster has become Our Man in Havana, using a screwy senator as his pawn to talk a Rum King into hatching a deal to get Bacardi into the States as soon as Prohibition is inevitably repealed.  But trouble always seems to find our anti-hero, and Havana might be too hot to handle for the aging kingpin, who for the first time in his life is placing his biggest bet on a legal operation.

One wishes scribe Korder had been allowed to simply flip back and forth between Kid Nucky (a well-cast Nolan Lyons) and Havana Nucky (Buscemi now playing a man world-weary but still with his wits fully in tact) as he seems to relish in the epic (could this be a tragic?) character arc, but alas, this Empire has always been about the side stories which in the past have threatened to meander into clichéd gangster nonsense.  Tonight we saw Chalky (Michael K. Williams) stuck in a chain gang with a dent-headed singer, Margaret (Kelly MacDonald) watch her boss blow his brains out at the office after never recovering from The Crash, and Lucky Luciano (Vincent Piazza) get made after Masseria finally gets his just desserts.  I met these stories with a hmmm, oh and eh.  We’ll see where they take us as the final season plays its hand.

New Characters to Watch:  The Young Nucky is compelling enough to warrant more screen time (and previews lead us to believe these flashbacks will continue), as is the Cuban ear-slicing aficionado bodyguard.

Wait Until Next Week: What’s Lansky up to?  If Rothstein is dead, did he leave anything for Margaret?