Is Gone Girl the Greatest or the Worst Hate Story Ever Told? 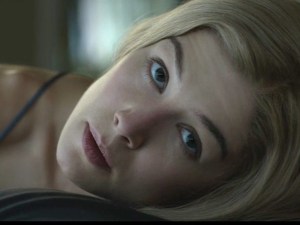 I’m drinking a glass of wine as I write this review of Gone Girl, as I imagine this is how many fans of the book enjoyed reading Gillian Flynn’s twisted and twisty tale of the worst marriage ever.  I didn’t read the book, so the twists came as genuine surprises to me, and I credit my fellow critics for not really spoiling much in their reviews when the book and film are so damn spoilable.

But the thing you have to know about David Fincher’s film adaptation (spun for the screen from Ms. Flynn’s own hands) is that EVERYTHING about it (okay, and maybe this is a spoiler, so sue me)…is a ruse.

The trailer, which to uninitiated filmgoers looked like it gave away the whole film…in fact (and I suppose the readers knew this) gave away nothing.  Here was Fincher commenting on the nature of modern film trailers to give away too much.

Flynn’s script – yup, a ruse!  In meta fashion, she’s linked up with Fincher, whose most commendable recent effort was a film that posited the creation of Facebook as a grand act of spite, and had just come off his failed attempt at adapting the vile and reprehensible Girl with a Dragon Tattoo.  Were Flynn and Fincher uniting to comment on the fake lives we create for ourselves through social media and the fake lives we entertain ourselves with on reality TV, both of which greatly inform the central mystery of Gone Girl?  Eh…maybe…but it’s more likely Fincher found in Flynn’s tale another vehicle to carry his hatred of humanity (and especially women…I mean, when their heads don’t end up in boxes like in Seven, they typically end up in the most tortured relationships imaginable) to the masses who love his slick, polished productions.

The first hour of the almost three-hour film – you guessed it, also a ruse!  Everything about  it is off.  Reznor’s music is like a parody of his work.  The dialogue is gag-inducing in its staginess (no one talks this way!).  The whole tone and pacing…shockingly off for a Fincher film.  But, aha!  It was supposed to be that way…designed to show the fabricated nature of the sordid calculated maneuvering of our lead characters.  And when the focus turns to Amy Dunne and the truth of her disappearance, suddenly all bets are off, and about an hour later, boom! – oh, yeah this is a true Fincher film where a box cutter…well, nevermind, I really don’t want to spoil anything here…really.

And what about the casting for the film?  All a ruse!  About half way through the film Ben Affleck’s character Nick Dunne (thought to be responsible for his wife’s disappearance) is being prepped for a TV tell-all interview by his lawyer (Tyler Perry – in another layered piece of superb stunt casting) and sister (Carrie Coon – as excellent here as she is on HBO’s The Leftovers) who throw gummy bears at him every time he comes across as smug of flippant.  Seriously, we should’ve been pelting Affleck with gummy bears for his entire career.  So, voila, he’s perfect here.  There’s also the famously likable, funny and homosexual Neil Patrick Harris, as a deathly serious man we are lead to believe has been sexually obsessed with Amy Dunne since high school.  Playing the “straight man” against all of this “joke” casting is Kim Dickens as the small-town detective who just knows there is more to this story than the simple truth.  The unheralded TV character actress kills the role, and she’s the only one you root for in this tale of despicable human beings.

Then there is Fincher’s Trojan Horse – Rosamund Pike in the titular role of Amy Dunne, our girl done gone.  It’s hard to talk about her performance without getting into the details of spoiling the whole damn thing.  Suffice it to say…I would reckon these comparison most apt:  Naomi Watts in Mulholland Drive (who similarly had a mid-film about-face where she went from deliberately acting bad to revelatory talent), Nicole Kidman in To Die For, and Glenn Close in Fatal Attraction.  Yup, Pike is that frickin’ good, and for better or worse she will likely always be remembered for this (and hopefully gets a well-deserved Oscar nod).

It all adds up to being either the greatest or worst hate story ever told.  I imagine you’ll love it, loathe yourself for loving it, loathe it, or love loathing it.  I walked away with sick delight, knowing that I had perhaps, in grand satirical fashion, just witnessed the most anti-romantic dark comedy since…you guessed it, Fincher’s own Fight Club.