The Sound and the Fury of Birdman 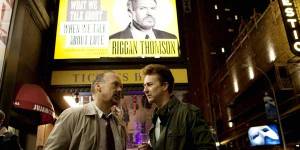 Alejandro Gonzalez Inarritu’s Birdman (from an a script inexplicable penned by the director and three others) might be a film about a washed-up action star writing and directing a Broadway adaptation of Raymond Carver’s classic short story, “What We Talk About When We Talk About Love,” but it’s that old Shakespeare quote about life being, “…a tale.  Told by an idiot, full of sound and fury.  Signifying nothing.” which inspired the title of William Faulkner’s alleged magnum opus (I’m not going to go off on a side-rant here about how Light in August is really his magnum opus and not The Sound and the Fury, which to me was always so…well…kinda like this Birdman here…self-indulgent) that runs through a viewer’s mind while watching Michael Keaton ACT!

Birdman is the super hero Riggan Thomson (Keaton) played twenty years ago and made him a mega-celebrity.  The Carver play is the intimate character-driven art piece he so desperately wants to restore his street cred and remake him into an Actor rather than a celebrity.  Inarritu’s film, in which the Birdman, the man who played him, and the play he creates exist, is exactly the type of film that people who watch only movies like Birdman (as in the explosion filled super hero movie within the film Birdman, not the actual film Birdman) think people who go to watch films like Birdman (the film, not the movie within the film) go to watch.  I can tell you now, Birdman, at times, is the worst type of those types of films that I like to watch.   It’s also, at times, maddeningly brilliant.

Inarritu’s central conceit is all so very meta and insular, appealing to those who believe in the myth of the tortured artist (“What do you risk?” Keaton blusteringly asks a brusk Broadway critic, “I RISK EVERYTHING ON THE STAGE!”) and those who live it.  It’s been dissected many times before.  It brought to mind the lines from a classic episode of Seinfeld where Jerry is forced to wear a fur coat and man-purse and the building super Silvio mocks him saying, “No, he’s very fancy! Want me, love me! Shower me with kisses!”  So then, how does a Director and a Cast make this often mocked mindset seem fresh and meaningful?  Surround it with sound and fury.

Inarritu cleverly teams with the best cinematographer on the planet, Emmanuel Lubezki, to trick the audience into thinking film was shot as one continuous take, thus putting us inside the head of Riggan Thomson as he crumbles under the pressure of staging his big comeback.  Inside this context, the rest of the cast bounces off of Keaton and the set designs within Lubezki’s frame.  It’s one of those films where everyone (spare for maybe Amy Ryan, wasted as Keaton’s ex) gets a moment: 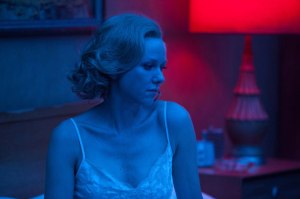 Then there’s Antonio Sanchez’s borderline obnoxious drum score (we get it, guys, Riggan Thomson is ON EDGE!) that is interrupted intermittently during moments of reverie with beautiful classical music.

All of it – the blustering acting, the awesomely creative cinematography, the music – is sound and fury wrapped around a very banal and self-indulgent story about an actor losing his mind.  Was it interesting to watch?  Yes.  Is it art?  I guess so.  Did it signify anything deeper than the surface level existential crisis of those who make a living playing make-believe?  Nope.