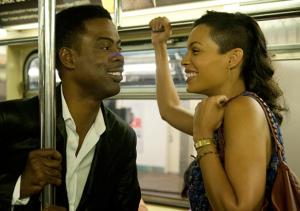 Chris Rock’s stand-up prowess and HBO boundary ripping hilarity never successfully translated to the big screen where, to be honest, his most memorable work was his voice-overs in the Madagascar series.  So here he is now, in the beginning of middle-age, trying to get his groove back by writing, directing and starring in Top Five.

Andre Allen (Chris Rock) is a recovering alcoholic and former stand-up comic who has decreed he wants to be taken seriously now after years of staring as a wise-cracking bear-suited cop in the idiotically successful Hammy the Bear series.  His first serious film, the Haitian slave-revolt biopic Uprising, is hitting theaters just as his marriage to a reality TV star (Gabrielle Union) is set to air on Bravo.  On the fateful day before his bachelor party, a NY Times reporter (Rosario Dawson) follows him around NYC for an in-depth interview.  Along the way the pair riff on life, love, politics and pop culture while making pit stops in Allen’s old hood to meet the family and friends he left behind as he climbed the ladder out of the ghetto and into Hollywood stardom.  The cast features great turns in small roles from some of my favorite comedians including Tracy Morgan and J.B. Smoove, as well as countless cameos –  some of which (DMX singing “Smile”) work, and some of which (Adam Sandler doling out marriage tips) don’t.  There’s also a “watch out, world, here she comes!” spin from Leslie Jones who proves she’s waaaay funnier than her strained bits on the current season of SNL.

Despite its obvious eschewing of the entertainment business and celebrities and its tenuous parallels to Rock’s own career, Top Five miraculously avoids becoming an insular cell of wall-to-wall in-jokes (though there are plenty).  For most of its cameo-laden run-time, it’s actually a sophisticated romantic comedy where Dawson’s character has her own ulterior motives that lead to enjoyable banter and palpable chemistry.  Both leads relish in bouncing off each other’s energy with Rock finally fulfilling the promise he has always shown and Dawson fulfilling the promise she showed over a decade ago in such films as Sidewalks of New York and 25th Hour.  As fabricated as their “all in the same day” whirlwind tour of the city becomes, you root for something real to take root because the two are so engaging and delightful to watch.

But here’s the thing about Top Five – Rock peppers (or shall we say…hot-sauces) the sophisticated banter with bawdy and raucous flashbacks of each character hitting their own kind of rock-bottom where we are bombarded with physical and sexual slapstick while the film pushes the limits of good taste.  Rock seems to be commenting on the sequences’ ridiculousness – witness the hilarious facial expressions he employs in the cringe-worthy climax to the flashback involving Cedric the Entertainer – yet the sequences are there in all their gross-out humor glory and will likely be the most memorable parts of the film for many members of the audience.

Bawdy sophistication is hard to pull off.  You can’t show the censor-baiting over-the-top bits in trailers, nor can 30-second clips capture the casual cool and engaging flow of Rock and Dawson just walking and talking.  Top Five thus becomes a hard sell, and those who do take a chance on it run the risk of being alienated one way or the other depending on their tastes in humor.  Yet somehow the film still works in similar ways as Bridesmaids did, as both films are smart comedies wrapped in dirty jokes.  Top Five might never reach the peaks of the best of Rock’s stand-up or his HBO show, but it’s a strong effort and rivals Jenny Slate’s Obvious Child for best comedy of 2014.

You can’t blame Rock for, and have to appreciate that, he’s firing on all cylinders and in all directions.  The film features a recurring motif where characters name their Top Five rap artists of all time as well as a modern Cinderella theme woven into the lead story’s fabric, both of which come to a head in the film’s closing moments (for the record, I kinda agree with Dawson’s picks).  In the end Rock seems to be saying it’s not about having it all…or even your top five…it’s about having that one.  It’s a charmingly old-fashioned notion surrounded by cutting edges.