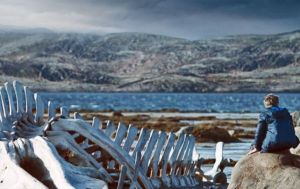 A corrupt mayor of a remote Russian fishing town (Roman Madyanov) waxes bluntly that “there are a lot of assholes at the bottoms of hills” but if his character proves anything, there are even bigger assholes at the top.  He comes across like a Russian version of Toronto’s own Rob Ford – only without the charm.

Another character, the gruff fish-mongering wife of a cop (an excellent Anna Ukulova), muses on men while watching her rambunctious young son, “At first you’re pretty and then they kill you.”

Andrey Zyaginstev’s Jobian melodrama, Leviathan, is full of these Russian-isms.  Bookended by bleak but beautiful seaside photography from Mikhail Krichman shown in perfectly framed shots scored by Philip Glass’ tense minimalist music, the film tells the tale of Koyla (Aleksey Serebryakov – who looks ripped from the stone-cold misery of a Ingmar Bergman film), a man who the mayor, the system, and the church demand be put in his place.  His ancestral home has been seized by the government at an unfair price.  His wife (a seductively sad and emotive Elena Lyadova) is sleeping with his lawyer and friend (Vladimir Vdovichenkov ).  His teenage son (Sergey Pokhodaev) is surly and depressed.

The characters in the film drink, eat, go shooting and screw each other in more ways than one.  The film is at times so cold and remote that it feels sapped of tension.  Glass’ score could’ve have been used more judiciously to accentuate and remind the viewer just how intense the drama is.  I also found myself craving some form or poetic justice.  Beached or soon to be beached whales seemed to be metaphors but were always in skeleton form or at a haunting distance, cranes threatened to demolish houses with people still in them but were held at bay until the very end, and a promise of “burning it to the ground” is never fulfilled even though it would’ve been the perfect way for a son to honor his father.  But this isn’t that type of film.

Those in power (the government, the church) keep it and continue to corrupt.  The little people suffer and or crushed.  The world keeps turning.  Snow keeps falling (it was falling outside the movie theater, too, in knowing fashion).

This is Russia.  This is the way of the world.