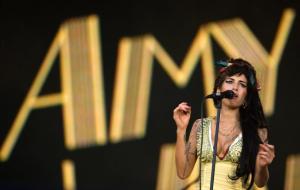 In David Lynch’s seminal classic Blue Velvet (which thematically shares with Amy a tortured dark-haired chanteuse manipulated by her own internal demons as well as the vile men in her life), the line, “And now it’s dark…” is used as a secret password into a nightmarish world lurking underneath white picket fences.  Later in Mulholland Drive, Lynch meditated more deeply on the tortured female soul, the flickering white lights after a failed actress’ suicide eerily like the flashes of the paparazzi’s cameras.  Asif Kapadia briefly muses on the cameras that blinded Amy Winehouse’s soul as well, but his humanist documentary is so much more than just a portrayal of the archetypal tortured artist.  Amy was a tortured soul long before the celebrity-obsessed cameras devoured what little was left of her.

Watching her meteoric rise and subsequent crash and burn play out in the media as it happened, I had this notion of Amy Winehouse as some meta-dramatist (with a killer voice, sassy attitude and old-school jazzy vibe) who was hell-bent on living the stereotypical hard-drinking lifestyle of a musician.  I baked in my head a stale soufflé of her as someone who wanted to drink because she thought it brought out the best in her art, because she thought that’s the way a real jazz musician had to behave, and that harder drugs were just a doorway to another level.  I couldn’t have been more wrong about poor Amy, who in her own words and rare archival footage, makes it clear she was most brilliant when she was sober and wrestling her demons through music, and that all the drinking and drugs were self-medication for when she couldn’t find her voice, not necessarily her literal voice, but her hard-fought catharsis in pouring out her soul through songs that filled the voids that had existed in her life since childhood (which was not so much Grand Guignol, but ordinarily sad in its universal familial strife).  I had no idea her lyrics (always noted for their cunning wordplay that lent itself so beautifully to her signature annunciation, lilt, rises and attitude) were so literally literal.  They often deceived a listener into thinking they were metaphors, but they weren’t.  She was not one to mince words.  Her albums were her autobiographies.  And they painted a tragic tale.

Kapadia is equally cunning in his depictions, never outright demonizing anyone, though in letting them speak for themselves, the villains in her life (and death) are outted.  It’s also clear that there were many people (childhood friends, a deceased grandmother, her first manager, a kindly bodyguard) who loved her and desired to help her clean up her act only to be thwarted by not just Amy but also these clueless, selfish, and co-dependent scumbags who infected her like a virus that rotted her out from the inside.

Late in the film there’s an epically sad replay of her across-the-pond reactions to winning all those Grammies (on a rare evening when she was stone cold sober) where she tries to put on a little act of demure and humble surprise (she never wanted any of this) where she ultimately looks like a sad little girl just wishing for someone…anyone…to hold her up.  Later while recording a duet, Tony Bennett has such lovely words to say about Amy, it’s heartbreaking.  You just wish someone like him could’ve been her father instead of an opportunistic pig (who had the audacity to bring reality-TV film crews to St. Lucia when Amy was so desperately seeking a common escape).  You wonder…what if that early attempt at Rehab had not been sabotaged by a literal line that became the anthem of her painfully ironic mega-hit where she sang, “Daddy say’s I’m fine…so I won’t Go, Go, Go…”?  What if she had never met Blake Fielder?  What if her parents had not ignored her teenage revelation of bulimia (whose complications coupled with extreme binge drinking lead to her death)?

There’s a lot of what if’s on one’s fall into an unfathomable abyss.  Amy’s story is a sad one of bystanders’ helplessness, enabler’s denial and stalwart self-destruction.  And Kapadia’s film (one of the best of the year) is a sympathetic meditation on one woman’s losing battle with toxic self-medication.  Was Amy Winehouse (so playful, funny and knowing in her early interactions with the media) a typical tortured artist?  Far from it.  She was tortured.  She just also happened to be an artist.  One whose voice will never be forgotten, even though she herself tried, and…in some “larger picture” and fitfully poetic way…failed to send it into oblivion.