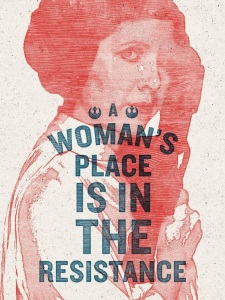 Americans love movies. The movie theater has in many ways always been (even through the golden age of television and our current age of social media) our most beloved and nostalgia brewing institution. Often when our other beloved institutions, namely of a political nature, become maligned (and most recently, tainted a most toxic orange) Americans will flock to the darkness of the communal cinematic space and revel in stories of real and fantastic rebellion. Could there be a more perfect milieu for the crowd pleasing and rabble-rousing likes of Hidden Figures and Rogue One?

In Hidden Figures, three strong, smart African-American women (Taraji P. Henson, Octavia Spencer and Janelle Monae) battle with a quiet, stalwart dignity (okay, and a little sass) sexism and racism in early 1960’s Virginia while working for the Space Program in Langley as computers. They are three amongst many, and this true tale provides uplifting insights into their everyday battles as one strives to leave her mark computing the re-entry trajectories for John Glenn’s historic orbit, another educates herself and her whole department how to operate one of the first super computers so that she can finally be promoted to supervisor, and another battles social mores and the courts to become the first female engineer. Directed with assured by-the-books style by Thedore Melfi (who previously helmed the crowd-pleasing St. Vincent), the movie hits all the right notes with lovely period set and costume designs and three feisty lead actresses. The women spend a lot of time walking…with purpose…marching if you will…bending that long arc of history towards freedom. Is it any wonder that the audience I saw it with was wildly clapping at even the smallest of victories…like a white male superior, played by that nitwit from the moronic Big Bang Theory, serving Taraji P. Henson’s character a desegregated cup of coffee, but only after she worked her ass off to prove she was his equal? If Hidden Figures proves anything, it’s that to build big change, we have to celebrate even the smallest of steps up that hill to the promised land.

Meanwhile, in a galaxy far-far-away (somewhere between Revenge of the Sith and A New Hope), a nascent rebellion brews against a cancerous empire in Rogue One. From Gareth Edwards zippy direction to Michael Giacchino’s rat-a-tat-tat riff on John Williams’ iconic score, Rogue One is a well-oiled war machine of efficiency and entertainment. Gone are both the branded silliness (though there is a wonderfully deadpan droid who gets some darkly humorous one-liners) and the pall of reverence that have plagued much of the series. As a stand-alone, one-off entry in a sprawling mythology, Rogue One might be the most stream-lined Star Wars flick ever and delivers more self-contained bang for your buck than the fun but cumbersome Force Awakens. The plot is that age-old tale of a rag-tag team of misfits (lead by the petulantly cute Felicity Jones) who go on a suicide mission to take down the Nazis…I mean the Empire. Here, it’s the blue prints for the Death Star (revealing its fatal flaw) that they’re after. And let me tell you, when that giant Kermit-the-frog of an admiral makes that call to collapse those star ships into that giant space barricade to take down the shield, thus allowing Felicity Jones to transmit those blue prints up to his ship, it was a “Take Down that Wall!” style moment that could unite us all in a little space-opera catharsis.

Earlier in the film, the amazing Peter Cushing was brought back to life with some cinematic wizardry that was both eerie and wondrous. But then there is that moment at the very end…a moment that is only so deep in the context with which is viewed…where some kind of bizarro computer amalgam of a young Carrie Fisher, brought back to life as our beloved Princess Leia, turns around wearing that white cloak, and snatches that blue print disk.  “What is it?” a man asks. And in a single word, for the first time ever in a Star Wars film, there might be a twinkle of a tear in your eye, when she responds with a simple, confident, “Hope.”

Ah, but my friends, if the action-packed Rogue One has proved anything, it’s that hope is nothing without action.

Let us not be a rogue one…but a rogue many. The fate of the world hangs on those who, like our ladies in Hidden Figures, move their feet…down that hallway…across that campus…around the world.

Sometimes we get the movies we deserve.