Shhh Will You Please Be A Quiet Place? 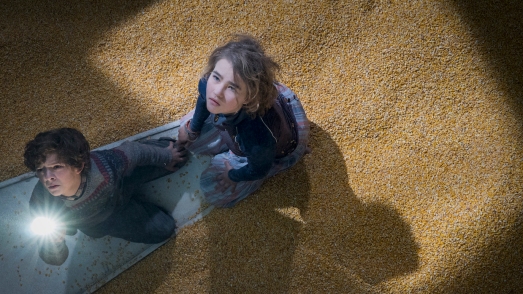 *SPOILERS CONTAINED IN THIS REVIEW*

Apparently marrying Emily Blunt can give a guy an ego the size of Will Smith’s.  Case in point: John “Jim from The Office” Krasinski, who has the nerve to star and direct in his own horror allegory vanity project, A Quiet Place, and cast himself next to his wife (the future Mary Poppins) who is quite frankly pretty amazing in anything…no exception here.  Krasinski (a usually amiable goofball) is pretty terrible as a serious actor, but he’s a decent little workmanlike director, and his wife and the two kid actors (Millicent Simmonds and Noah Jupe) give compelling performances that allow their characters and the action to rise above Krasinki’s and the screenwriters’ shortcomings.  The film, though far from original in either theme (shhh…you gotta stay quiet to survive this post apocalyptic horror show run by marauding blind monsters who hunt by sound) or design (haven’t we seen these clicking gawky body-ripping creatures before…like, in everything…oh wait, they have really nifty ears here), ends up being above average for the genre.

The whole thing is overtly an allegory about parenting…but you know, the “parents need to be martyrs” and “father knows best” over-protective “the world is a dangerous place” patriarchal kind of parenting.  There’s also a painful to watch opening that exploits a small child for the sake of both shock and sentimental value.  It gets the film off on the wrong footing, though about forty minutes in when the surviving family members are split up (pregnant mom and daughter home on the farm, and father and son bonding in the wilderness), the tension rises and we’re treated to a rip-snorting little creature-thriller.  Chaos ensues, as each family member becomes further isolated in the melee, and the two children are reunited only to fall through the roof of a grain tower into a horrifying pit of corn.  Of course, all that racket attracts a nasty old creature, and the panic and terror that results makes for the best scene of the film.

Then Krasinksi had to go and ruin it with all that martyr stuff.  But his wife wisely, and bluntly, takes charge in the end…the film closing on a high note…and a sonic screech.  None of it makes much sense, and all is likely to be forgotten quickly, but there are far worse ways to spend 90 minutes in a quiet theater.