I Love You to the Moon and Back in First Man 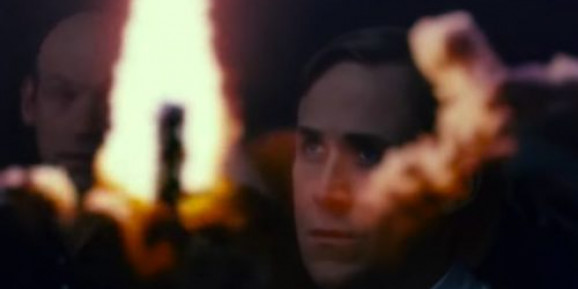 There’s something sad at the core of Damien Chazelle’s historical hero epic, First Man, and it’s not just star Ryan Gosling’s dreamy pale blue eyes that look up longingly at the moon or the melancholy tones of Justin Hurwitz’s musical motifs punctuating the film’s sorrowful and soulful meditative moments.  The film is constructed like a visual and aural tone poem, swinging from moments of breathless action and wonder to lyrical interludes of domestic intimacy, all shadowed by tragedy.

The opening moments where we are smack dab in the thick of a test flight thrusting Neil Armstong above the earth’s atmosphere are among the most thrilling I’ve felt since Dunkirk, all sound and fury and rattling nuts and bolts and creaking ship hulls.  But when not relishing in the “in the moment” nitty-gritty details of how we got to the moon, the filmmakers take a huge gamble by positing (with some poetic license) that the primary motive behind Neil Armstrong’s push to the be the first man on the moon was perhaps grief – namely finding a way to process the death of his two-year old daughter, but also the grief over the astronauts who lost their lives in earlier failed missions. It worked for this viewer (and new dad) but it makes for a surprisingly somber tale colored with a psychological complexity I was not expecting.

The film is wonderfully acted, painstakingly detailed, beautifully scored and thoughtfully presented (for example, Chazelle’s killer shot of the Apollo 11 rocket lit up at night, eerily looking like a grand actor striking a pose on a spotlighted center stage).  Yes, there are some liberties with story arcs to create the grandest (and saddest) of dramatic tension.  Did Armstrong, in secret, really leave behind a sentimental memento on the moon?  Nobody knows for sure…but, man, what a story.

In the end First Man shows how great we can be if we work together for something larger than ourselves while individually processing our grief, and sometimes it takes many trials and errors.  Indeed, the biggest leaps are often preceded by the smallest of steps.