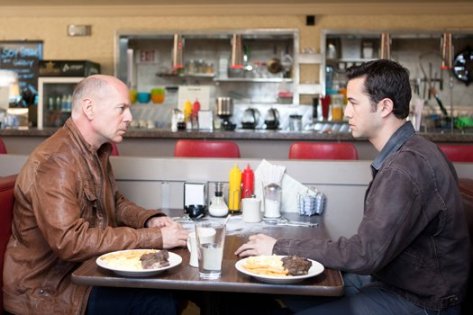 I’m 60 years-old.  I’m retired and living in Sri Lanka on a tea farm I purchased for my long-lost love with whom I recently reunited.  Don’t ask…just go with this fantasy, okay?  She’s lying in bed next to me with her back against mine.  A balmy midnight breeze blows in through the window and the white curtains scale up the walls and then billow down.  My mind is similarly rising and falling in humidified thought.  I can’t sleep.  I saw something today that reminded me of a film I once saw a long time ago but I can’t quite place the moment or the film.  She’s half-awake, too.  She turns over to face me and runs her hand through my hair.  I whisper to her, “Were you there with me?  Do you remember that movie?  It was soooo good.  You know, the one about time travel where the guy was on the run from his future self and he hid out on that farm in Kansas with that beautiful woman and her little kid who could…”

…well, I don’t want to spoil it for you.

Behold the litany of reasons Rian Johnson’s Looper is an instant genre classic I will fondly recall when I’m 60 years-old: END_OF_DOCUMENT_TOKEN_TO_BE_REPLACED

Crowe explains to Affleck, "I'm telling ya, Ben, I don't care what they say, this long hair is gonna work for me."

A gruff old-school reporter (Russell Crowe playing his A-game) becomes personally entangled in a breaking news story surrounding his old college buddy turned congressman (Ben Affleck, not as bad as you would think) and a young female aid who died under mysterious circumstances in the surprisingly plausible political thriller State of Play from director Kevin MacDonald who was previously responsible for The Last King of Scotland.  Though designed as a throw-back to paranoid investigative thrillers from the 1970’s, relevance is gained when the massive cover-up revealed becomes a vehicle for the filmmakers to explore the death of print news at the hand of digital mediums.

The twisty and engaging screenplay is credited to three scribes: Matthew Michael Carnahan, Tony Gilroy and Billy Ray. But it’s Gilroy’s fingerprints that shape the story with all the overlapping dialogue and conspiracy talk that will remind many of his Michael Clayton.  Adapted from a sprawling BBC miniseries created by Paul Abbott, the trio is especially deft in their condensing of the story into a fully digestible two hours. Even as new characters and twists keep coming, the audience is never left out in the cold. They also give the cast plenty to chew on with some great throw-away lines amidst all the posturing between the cops, reporters, politicians and sleaze-bags.

Though it’s Crowe and Helen Mirren as his sparring and quick-witted boss who shine the most, this is essentially an ensemble piece, and it’s especially clever when Jason Bateman arrives on screen for a few pivotal scenes as a smug public relations guru who’s too dumb to realize he knows too much. The cast also includes Robin Wright Penn as Affleck’s wife, Jeff Daniels as the arrogant majority whip and Harry Lennix, who as a D.C. detective makes a compelling case here for the lead role in the Barack Obama Story. The only miscalculation in the casting is poor Rachel McAdams, lovely but annoying in her high-pitch as Crowe’s blogging tag-along looking to kick it old-school and get something in print.

By the third act State of Play overplays its hand in its attempts to be timely with too much talk of the privatization of the military, Capitol Hill sex scandals and traditional newspapers losing out in the digital age to bloggers more concerned with gossip than real journalism. It could’ve also been more subtle in its preaching about the importance of serious investigative reporting.  It should be commended, however, for an otherwise smart screenplay that doesn’t spell out all its twists and turns too early and the well polished cast who give the film a slick sheen. Even though it might be reporting on yesterday’s news, State of Play still makes for solid rainy day entertainment and is worthy of blogging about.