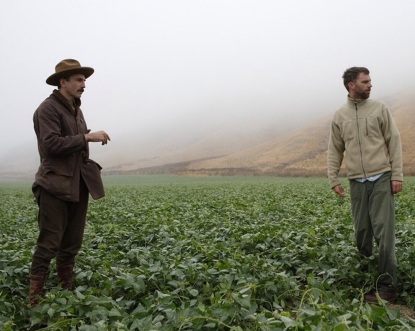 A master schooling a master.

In honor of the release of The Master later this month, The Spin is turning its wheels towards Paul Thomas Anderson – writer/director extraordinaire – a true auteur. The great chronicler of Southern California, cancers both physical and metaphorical, dysfunctional makeshift families, deranged father-figures, damaged sons, melancholy and death is arguably the most ambitious American filmmaker working today. But he has only achieved that status through evolution…through finding his voice. Here we will revisit his three most signature works: Boogie Nights, Magnolia and There Will Be Blood and track the course of his discovery.

“This is the film I want them to remember me by.” – Jack Horner, Boogie Nights

On its surface, Boogie Nights – the grand piece of nostalgia celebrating a pre-AIDS, pre-video porntopia – would appear as a lark – a jokey, ballsy, “Look, Ma, I’m a Hipster Director!” type feature designed to showcase a young man’s skill behind the camera and his cocky nerve to tell a scandalous tale. When you look deeper, the film is anything but that.

END_OF_DOCUMENT_TOKEN_TO_BE_REPLACED

Despite last year’s anomalous presence of standouts like Shutter Island and The Ghost Writer, late winter and early spring are typically the cinematic doldrums, unless you like animated kid’s stuff.  This year seems even more vacuous than usual, probably due to the high quality of left-over “I’ve seen it already!” Oscar fare and the still fresh memories of last year at this time when things weren’t so bad.  But in a multi-media age, one need not look far and wide to find ways of “Sheening It” and winning, duh!  Here are three very different films (Cedar Rapids, Never Let Me Go and Carlos), available through different venues that, for better or for worse, all have tiger blood running through their veins.

Anne Heche, your career was in free-fall? Don't worry, we gotcha!

Cedar Rapids – Successfully combining the “Dumb Guys Gone Wild” humor of films like The Hangover with the contemporary societal mirror-holding of films like Up in the Air while channeling it all through the gentle “family is whoever you want it to be” humor of Springtime quirky-indie comedies ala Little Miss Sunshine, Cedar Rapids quietly fires on all cylinders and wins.  END_OF_DOCUMENT_TOKEN_TO_BE_REPLACED

I’m almost embarrassed to be posting this review, but sometimes a dumb spoof comedy is just what the doctor ordered.  When the greater world outside you seems to be going mad, and the holiday season is stressing you out, sometimes you just want to laugh for a few hours.  It’s good to laugh at ourselves…laugh hard

When young Dewey Cox accidentally cuts his brother in half with a machete, it sets him on a long, hard, and winding road that traverses the most profoundly important moments in modern music history spanning the 1950’s to today. “Walk Hard” was erroneously advertised as yet another comedic romp from Judd Apatow. While as the co-screenwriter here many of Apatow’s trademarks can be found including the usual sophomoric sexual humor and ironic pop-culture references, “The Dewey Cox Story” is actually closer in spirit to the mocumentaries of Christopher Guest (“This is Spinal Tap!” and “Best in Show”) as channeled through the spastic colon of the “Naked Gun” films.

This is a parody played hilariously straight. The target of its mockery is so succinct and sharply pointed–the recent Oscar-winning musical biopics “Ray” and “Walk the Line”–that the film’s true comedic genius may be lost on people who didn’t really pay attention to those films or thought this would just be another “Superbad.” The film’s mimesis of its source materials is so spot-on, that it even follows their same cadence and nearly falls apart midway as it glosses over many points in history and aspects of the musician’s life while covering every cliché possible from the temptations of life on the road with drugs and groupies to bouts in rehab and bitter divorces to long dry periods that suddenly make way for life-altering inspiration.

At the center of “Walk Hard” is John C. Reilly who sings and acts his heart out to hilarious effect. A former Oscar nominee for “Chicago”, Reilly has since cut a niche for himself as the second banana to bigger comedy stars like Will Ferrell in “Talladega Nights” and for the first time gets a film to call his own. Tim Meadows is shockingly funny as the friend who ushers in Cox’s decent into drug use (his overly accentuated but still deadpan line deliveries are priceless), while Jenna Fishcher is sprite and lovely as the June Carter cutie to Cox’s Johnny Cash wannabee. Other SNL players including Kristin Wiig and Chris Parnell and Apatow alumni like Paul Rudd (as John Lennon!) and Jonah Hill pop in and out of the film amidst an onslaught of funny sight-gags and one-liners. Also in on the fun is a cavalcade of current music stars including the lead singer of the White Stipes as Elvis and Eddie Vedder as himself doing a nonsensical quasi-spiritual riff on Cox’s legacy while presenting a Lifetime Achievement Award.

The heart of “Walk Hard” is in the music. If you were to not listen so closely, you might be fooled into thinking these were actual hit songs from their respective time periods. Of course, listening to the lyrics is part of the fun. The ridiculously silly double-entendres in Cox’s duet with his honey-to-be Darlene are especially funny, while I personally found their spoof of a Bob Dylan song to be downright brilliant. Since the writers took the time to be so verbose and intricate with their nonsensical free-form versing, they allowed the bit to work on multiple levels as both an homage and a biting jab at Dylan’s alleged lyrical genius.

Utimately “Walk Hard”, in ways both monumentally stupid and unfathomably smart, proves to be almost too clever for its own good. It may have bombed in it’s first-run at the box office, but I would imagine it will eventually find its audience. In one pivotal early scene Cox begs his wife to believe in him and his dreams of becoming a successful singer. She replies something to the effect of, “Oh, baby, I do. I just believe you’re gonna fail.” I couldn’t have said it better myself, and it still has me laughing.