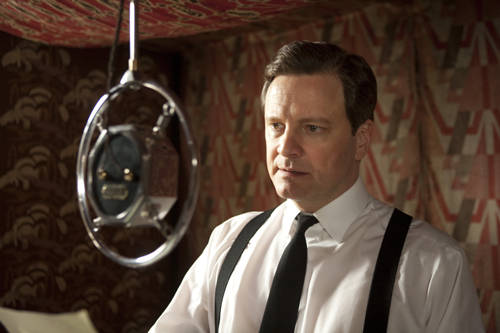 Character driven historical dramas used as vehicles for acting showcases have long been the bread and butter of many an Oscar campaign.  The King’s Speech is one such throw-back picture, harkening to a simpler time when entertainment was good and pure.  It’s 100% by-the-numbers bread and butter…but it’s that really good bread, you know the kind that is crusty on the outside and warm and tender inside, and the butter, it’s like that really fancy kind infused with garlic and stuff.

It’s the dawn of WWII in England, and the royals are still reeling from the Wallis Simpson scandal.  After his brother abdicates the throne, King George VI (Colin Firth – not looking, but certainly acting the hell out of the part) reluctantly takes charge while cowering in fear of a life-long stutter.  With the help of his wife, Elizabeth (Helena Bonham Carter, still damn good when not stuck in Tim Burton films) he finds an unlikely speech therapist in the Australian Lionel Logue (Geoffrey Rush in his wheelhouse) to help him overcome his stammering.  END_OF_DOCUMENT_TOKEN_TO_BE_REPLACED