Notable Omissions (films I’ve yet to see that are showing up on a many Top Ten lists):

Call Me By Your Name, The Shape of Water, I Tonya, The Post, All the Money in the World

Worst Films of the Year:

Speak your mind and join the discussion by leaving a comment!

Outside of the theaters, 2016 was one of the most tumultuous years around the globe, especially politically with Brexit and a US presidential election that saw “the virulent madness” prophesied in 1976’s Network come to a red-hot orange, roiling, boiling head. The greatest of films often speak to the times in which they were made, and 2016 saw tumult of the artistic kind in cinema mirroring (whether intentionally or not) what had been bubbling up in society for years. If it proved anything, it’s that art is 50% the artist’s intent, and 50% the lens with which the audience views it through. Artists and audiences alike brought heavy baggage into the theaters, and we witnessed some potential masterpieces.

For me, the year’s most memorable film, Arrival, allowed the audience to breathe a collective sigh of relief at just the right time and showed us life is still worth living even when we know how (potentially horrifically) it will end.  The lovely and melancholy musical La La Land arrived at the tail end of the year to remind us it’s still okay to dream big, even when those dreams don’t always play out how we originally hoped (hope is not a strategy…but hard work is). The masterful character study Moonlight showed humanity and beauty can still be found even in the most dire of circumstances, and the search for one’s true self is a continuing journey. The true-story Loving uncovered the most sturdy bricks for building a compassionate society are quiet dignity, grace, and steady determination to fight for what’s right. Then there was the neo-western Hell or High Water, which tapped into some of the same economic rage a certain political campaign did, and showed presciently that sometimes “what don’t ya want?” is what you accidentally bring upon yourself.

My Top Ten picks for 2016 have been chosen with some initial thoughts and links to my full reviews below: END_OF_DOCUMENT_TOKEN_TO_BE_REPLACED

There’s nothing quite like a well made, artfully done, depressing-as-hell film.  It’s what I love.  It’s what I long for when entering a darkened theater — my There Will be Bloods, my Sweet Hereafters, my classic noir, my psychological dramas, my human tragedies.  I avoid musicals and romantic comedies like the plague…these being films most would claim as “feel good”.  But there’s something special about a well done “nice film” that can brighten one’s spirits.  And then there are those off-the-wall comedies that make you laugh over and over.  After watching one of the most draining and harrowing films of recent memory, the artfully done but dehumanizingly humanist IRA-hunger-strike-in-prison drama, Hunger, I realized I needed a pick-me-up.  So what movies make someone like me feel good?

Well, here’s the Schleicher Spin on Ten Feel Good Films that totally “get me”:

10.  Ratatouille (2007) – Hats off to this rat and the best Pixar film ever.  I frickin’ love this little French rat chef.  It’s all about the story-arc and character development here. 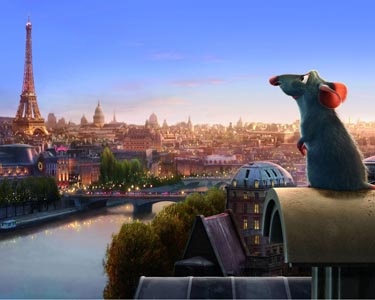 9.  Wet Hot American Summer (2001) – Really, how can you not feel good when a movie has these four words in the title:  WET, HOT, AMERICAN,  and SUMMER?  Yeaaaaah!  Summer camp and the 1980’s rocked, man!  This is the movie that Hot Tub Time Machine wishes it could be. END_OF_DOCUMENT_TOKEN_TO_BE_REPLACED