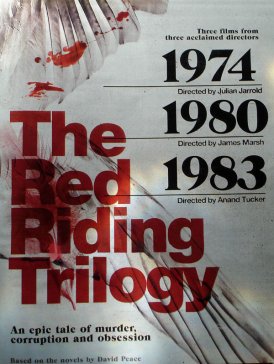 You wouldn’t believe it at the start of the grim trilogy of films that aired on British television in 2009 and were released in art-houses stateside in early 2010 (and new to DVD this month).  Spanning almost a decade (from 1974 to 1983) and following a labyrinthine plot involving missing children, serial killers, conspiracy theories and corrupt police officers in northern Britain’s Yorkshire area, The Red Riding Trilogy is hard-hitting, trippy, convoluted stuff…the stuff of communal M-like nightmares.

The first thing that is so striking about the films is their look – dripping in period detail and directorial chutzpah that’s like Godfather-era Francis Ford Coppola as channeled through Danish Dogme ’95.  From a critical standpoint, the consistent tone running through all of the films is even more astounding when you realize each part was directed, edited, scored and photographed by different teams.  The first two parts were directed by Julian Jarrold and James Marsh respectively, and it’s only in the superior third part (1983, directed by Anand Tucker) do we see any kind of deviation, and that’s only in a few powerfully placed auteuristic flourishes involving flashbacks and voice-overs.

I’m not sure how closely the stories tie into the real events that inspired them.  In an interesting comment thread that followed Allan Fish’s insightful post about the films over at Wonders in the Dark, the British Fish was apt to point out to an American left somewhat cold by the trilogy that, “…it resonates a lot more, a helluva lot more, because we lived it.”  Fish was so bold as to name the trilogy the third greatest achievement of the last decade, and while I wouldn’t go that far, I do think the films can speak just as powerfully to those who have never stepped foot on the British Isles.

Adapted by screenwriter Toni Grisoni from the novels by David Peace, the films evidentially play liberally with the source material.  In fact, one whole book (1977) is left unaddressed entirely, and that combined with almost all of the characters’ inner thoughts and emotions displayed through visual cues, leaves one wishing some characters were explored or explained more deeply.  Inherent to most neo-noir, the films are plot-driven, and often characters become inaccessible or lost within the mechanics of the events piloting the course of the story. 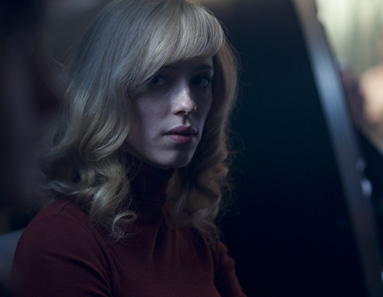 Though certain characters and subplots weave in and out of the trilogy, each film is pointedly focused:

While the first two parts go through the motions (and are as compelling as they are confusing) – it’s only in part three where you realize the true scope and moral of the tale.  The films are best watched in succession over the course of three nights.  To achieve the payoff, it requires patience and an investment in the overall vision.

What’s so fascinating is how part three preys on audience expectations and turns certain things thought to be true on their heads.  Characters who were at first sympathetic (the community activist reverend, played eerily well by Peter Mullan) are revealed to be anything but, while other minor characters (like BJ) achieve a form of redemption as we learn about their traumatic pasts.  The turnabout of David Morrissey’s character is especially intriguing, and it is in his actions where the audience can find catharsis.  Likewise Mark Addy’s solicitor is a prime example of someone in dire straits reaching deep down and doing the right thing, even if they do a number of wrong things before getting there.  This isn’t to say everything becomes crystal clear…there is sill much confusion with flashbacks, and just who really was behind it all is up for debate.  Some guilty parties still seemingly escape the claws of justice, while other innocents paid too dearly a price.

While so many modern films seems to enjoy showing us the banality of evil, The Red Riding Trilogy shows just how insidious evil can be – how it can trump even our most horrific imaginations.  They say absolute power corrupts absolutely, but what these stories show is that there is no such thing as absolute power.  In a free democratic society, corruption seeps in slowly and infects communities like a virus and can rot them from the inside like a cancer.  Whether it’s religious leaders corrupting innocence, the rich corrupting the government, the police corrupting the citizens, or the populace turning on itself…corruption will find a way.  But so does hope…and so does the once corrupt individual wanting to right the wrongs of the corrupt community.  The total effect of the trilogy is a slow burning build-up, and by the end of part three, it’s as absolutely devastating as it is tremulously hopeful.

It seems all good children do go to heaven…but sometimes only after living through hell.