The tumultuous events of The Thief Maker span four decades and speckle the landscape of the East Coast from New York to South Carolina.  The novel takes place in “my own backyard”–inspired by locations near where I have lived, visited and studied over the years.

The House on 22nd and Green Streets in Philadelphia where Felice Morrison, and later Marie Gail and her son-Rex Thomas Gail-live, is an actual location in the Art Museum district of the city.  I was completely transfixed the first time my friend and I came across the building while walking down 22nd Street towards the museum and knew immediately that it had to be in the book.  Upon my next visit to the area, I was smart enough to have someone take a photo seen below: 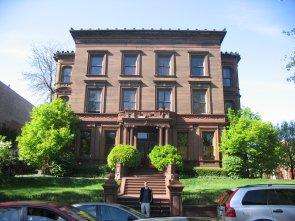 Book Heaven, the used bookstore where Felice Morrison and Rex Thomas Gail have their fateful run-in with Frank Morrison that triggers the landslide of tragic events leading to the end of the novel, is directly inspired by an actual used bookstore called “Book Haven” located exactly as described in the book on Fairmount Avenue in Philadelphia across the street from the famed and haunted Eastern State Penitentiary.  In fact, I donated some copies of The Thief Maker to this very store, so if you are ever visiting the Philadelphia Museum of Art or Eastern State, I encourage you to visit this delightful establishment and see if they still have a copy on their shelves.

Other real locations in the novel: St. Mary’s Hospital in Langhorne, PA and Philadelphia Park in Bensalem, PA.

Abram, South Carolina, the kudzu vine-infested hamlet and source of seemingly all, is a purely fictional town inspired by the many leizurely drive-thru’s and visits I made to the state of “Smiling Faces, Beautiful Places” while living in North Carolina for over five years.

Many of the specific locations in the novel were inspired by the work of famed American Realist painter, Andrew Wyeth.

“…that old farmhouse on top of the hill” (page 80) in Abram, was partly inspired by Wyeth’s haunting “Christina’s World.”

One of the characters who lives in the house, Annie-the childhood sweetheart of private investigator Marcus Pierce, was in my mind’s eye the spitting image of Wyeth’s beautiful “Siri.”

The Morrison House in Lancaster, Pennsylvania is somewhat based on Wyeth’s stark and chilling “Soaring.”  The feelings I wanted to invoke when describing the house where the tragic climax to the novel occurs is perfectly captured in the painting.  Like the barely visible white house in the painting that is eclipsed by the swarming carrion birds, the Morrison House is but a vague specter of a peaceful past now overshadowed by suburban sprawl and new developments dotting the once tranquil landscape of parts of Lancaster County.

And finally, the primary location in the novel, Talia on the Glen, where Tara Morrison lives, William Donovan runs his con-games, and Alice Hope, Marie Gail, and Lucas Tolliver work is not meant to represent any particular place.  It is an amalgamation of at least half a dozen retirement communities, assisted-living facilities, and nursing homes I visited for research in North Carolina, New Jersey, and Pennsylvania.

Ready to meet your Maker?  Steal a copy of The Thief Maker…

Purchase Now from Barnes and Noble