Making the rounds at the local art-house has been the trailer for the Robert Duvall/Bill Murray starring, character-study, period-piece Get Low — as in, “it’s time for me to –“.

Along with the indie darling Winter’s Bone and Christopher “Fritz” Nolan’s mega-budgeted, high-concept thriller Inception, Get Low ranks as one of the summer’s most anticipated films in my neck of the woods.  Come to find, the writer director Aaron Schneider won an Oscar a few years back for a short film, which just happened to be a an adaptation of what surely is one of my all time favorite short stories…William Faulkner’s “Two Soldiers” – the classic tale of a young boy desperately wanting to join his older brother as he heads off to war.

Low and behold I shot that thing right up to the top of my Netflix queue, and before I knew it was rereading the tale and watching the film.  Schneider changed up a few bits and pieces here and there, but I’ll spare you the academic blow-by-blow replay of the differences between story and film and just focus on the highlights.  Schneider chose to have the actors subdue their accents and mannerisms so as to avoid a cartoonish depiction of rural Mississippi in 1941, but in doing so, he lost in translation much of that Faulkner charm and authenticity.  Some sections of dialogue he took verbatim, while others he curiously changed up, and he also added back-story surrounding a bird egg which paled in comparison to the overriding feelings of “I just got to go to war” on the page.  Schneider honed in on the tale of true brotherly love in a polished and sentimental way where as Faulkner was organic and gritty, but he clearly has the directing chops from a technical standpoint.  I would compare his style to Spielberg, which should be high praise, but when backtracking to the Faulkner source material, results in a watered-down adaptation.  However, Schneider still beautifully captured in one shot that closing moment Faulkner used only a few lines on page to convey — a little boy, exhausted and tired after a long day of walkin’, hollerin;, knife-wieldin’, and searchin’, brought to uncontrollable unknowable tears while being driven home defeated and alone.

Faulkner wrote a sequel to this tale, the brilliantly titled and equally unforgettable “Shall Not Perish.”  Here we soon learn of the older brother’s death while at sea.  Meanwhile, his mother and brother go to visit the crazy, rich, old coot whose son was the only other boy in the county to have died in the war.  After questioning, “why and what for?”, mother and son visit a museum showcasing pictures of common folk just like themselves from all over the country, and the little boy left crying at the end of “Two Soldiers” is now heading home and musing on a sunset which appears like a wheel to cover all the earth.  In this moment he reminisces on his great-grandfather’s somewhat comical, somewhat tragic flashbacks to The Civil War, and comes to realize the “why and what for?”  The closing passage arrives at a revelation in an overwhelming crescendo and for me marks the greatest piece of writing William Faulkner has ever done and should stand as testament to anyone, anywhere, at anytime that he was indeed, for once and for all, the greatest writer this great land hath ever spewed forth:

And I knew them too. I had seen them too, who had never been further from Frenchman’s Bend than I could return by night to sleep. It was like the wheel, like the sunset itself, hubbed at that little place that don’t even show on a map, that not two hundred people out of all the earth know is named Frenchman’s Bend or has any name at all, and spoking out in all the directions and touching them all, never a one too big for it to touch, never a one too little to be remembered: the places that men and women have lived in and loved whether they had anything to paint pictures of them with or not, all the little places quiet enough to be lived in and loved and the names of them before they were quiet enough, and the names of the deeds that made them quiet enough and the names of the men and the women who did the deeds, who lasted and endured and fought the battles and lost them and fought again because they didn’t even know they had been whipped, and tamed the wilderness and overpassed the mountains and deserts and died and still went on as the shape of the United States grew and went on. I knew them too: the men and women still powerful seventy-five years and twice that and twice that again afterward, still powerful and still dangerous and still coming, North and South and East and West, until the name of what they did and what they died for became just one single word, louder than any thunder. It was America, and it covered all the western earth.  — William Faulkner, “Shall Not Perish” 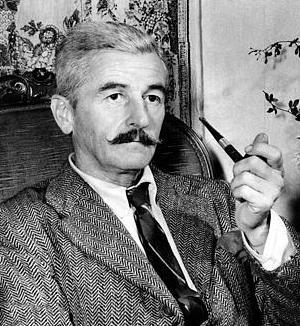 Betwixt Memorial Day and Independence Day, I can’t think of anything more knowing, more patriotic, more rooted in this here earth than Faulkner’s words, which should send chills down the spines of anyone who has known or been at one time, now, or will be in the future a soldier…anyone who was, is, or will ever be, whose feelings of “I just got to” and whose deeds and the memories of those who lived on beyond those deeds shall never perish from this earth.

3 comments on “William Faulkner’s Two Soldiers Shall Not Perish”