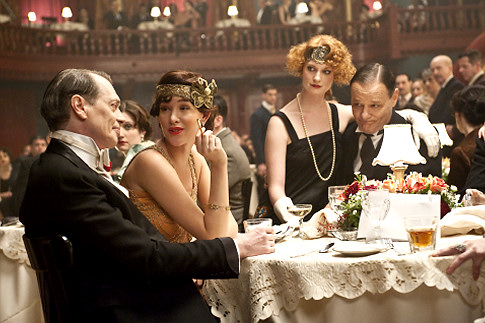 Season One: Episode One

Written by: Terence Winter (series creator, from the novel by Nelson Johnson)

The Spin:  Scorsese’s flashy pilot episode did not disappoint.  So much happened and so many characters were introduced (and a few already met their demise) it almost functioned as its own mini-film…not surprisingly given the man behind the camera.

My Favorite Parts:  All that period jazz music, the 1920’s version of an “insult comic”, the funny gathering of intel bit where Michael Shannon’s character tried relaying all the mobsters’ names to a hapless partner, and the ranting of Nucky’s sassy mob moll Lucy (Paz de la Huerta).

Characters/Plots I Can’t Wait To See Develop:  All of them, but especially the relationship between Nucky (Steve Buscemi) and Margaret (Kelly MacDonald).  Also, it will be interesting to see just how far Michael Pitt’s Jimmy character will go to seize his opportunity.

Favorite Line:  Nucky to Jimmy when Jimmy talks about finding an opportunity:  “This is America, ain’t it?  Who the f***’s stopping ya?”

The Verdict Is Still Out On:  The opening credits, which seemed anachronistically out-of-place with all the other sumptuous period detail and jazz music.  Also, the insertion of characters like Al Capone and Lucky Luciano could become distracting.