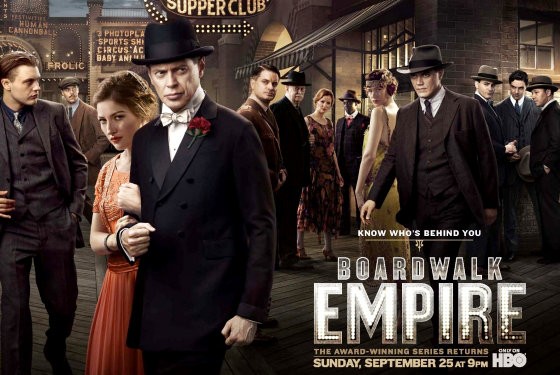 Written by:  Terence Winter (series creator) from the novel by Nelson Johnson

The Spin:  The winning combination of series creator/writer Terence Winter and producer/director Tim Van Patten pick up in season two right where they left off with season one’s superb finale.  Opening with a signature Boardwalk montage done to the tune of “After You Get What You Want…” the masterminds behind the show deliver a two-fold message.  To the characters, they’re saying, “Watch out, you might get what you ask for.”  To the audience they’re saying, “We’re not going to let you down, and you will get what you want and then some this season.”  Witness next a Klan shoot-em-up of Chalky White’s booze warehouse.  Strung throughout the episode; where we find Nucky trying to balance work/partying with home life/Margaret, Jimmy now married to Angela, and Van Alden’s wife visiting the city for the first time; is one of the show’s most compelling themes:  false domesticity and tortured father/son relationships.  Nucky knows something is up with Jimmy and the Commodore, but it’s his newly strained relationship with Margaret’s young son (apparently there’s no one Nucky won’t try to pay off) and an arrest for election fraud that throw him for the loop.  Meanwhile, other more hapless characters long for what Nucky and Jimmy have – seemingly having it all – the family, the luck, the power – but there’s something rotten in Denmark, my friends, and what those poor saps long for is a fantasy about to be riddled by bullets.  Beautifully weaving in all of those painstaking period details with self-contained motifs (love the kids watching Chaplin’s The Kid at the end there) while propelling forward the plot and character arcs that will define the season, Winter and Van Patten are setting us up for one doozy of year. END_OF_DOCUMENT_TOKEN_TO_BE_REPLACED 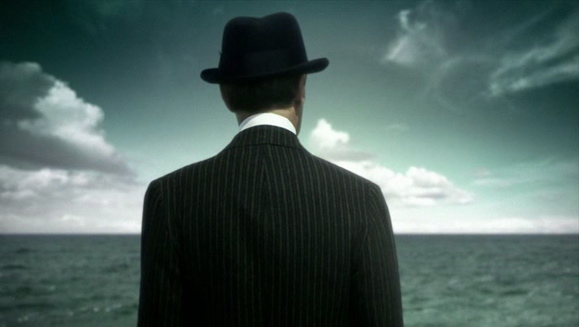 Written by:  Terence Winter (series creator) from the novel by Nelson Johnson

The Spin:  If I’m being honest, Van Patten has been the weak link in terms of directors for the series, but he finally pulls out all the stops and delivers a deeply satisfying season finale helped immensely by the hands-on teleplay from series creator Terence Winter.  Next to Mad Men, Boardwalk Empire is the best written show on television, and though there’ve been some rough patches, it tops AMC’s award-winner in terms of pure entertainment.  In the finale, all of our favorites get their big scenes (Emmy…Emmy, can you hear me?) but Van Patten keeps the histrionics turned down a notch.  Just as it seems like Nucky is making peace with all his enemies, the local and national elections go his way, and Margaret comes back to his side (not after his emotional revelation about the true nature of his wife’s passing, but after a silly superstition gives her a grim premonition she will do anything to make not come true), those closest to him (a recovering Commodore, a soused Jimmy, and a spiteful Eli) begin to plot against him.  Meanwhile, Van Alden is about to heave-ho from his new Carthage riddled with guilt until a saucy special someone shows up while he’s packing to announce a bitter bun is in the oven.  A winning period-song accompanied montage (which in grand Scorsese-inspired style has become the show’s most potently dramatic calling card) leaves us tinged with melancholy over what has passed and filled with equal parts hope and fear over what is to come.  The closing images of an early dawn soaked boardwalk are the perfect postcards to send viewers off for a long hiatus. END_OF_DOCUMENT_TOKEN_TO_BE_REPLACED 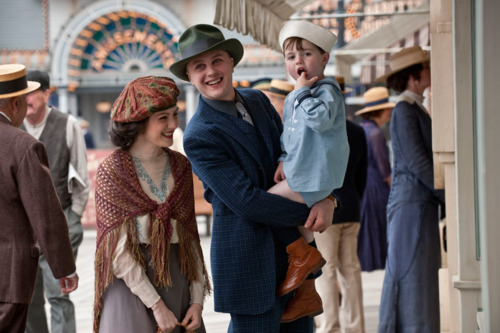 Written by:  Howard Korder and Terence Winter (series creator) from the novel by Nelson Johnson

The Spin:  Director Coulter wisely keeps with the “less is more” mentality he presented back in Episode Seven in this subdued but powerful episode where Korder weaves a stinging leitmotif around poisoning in both the literal and metaphorical sense.  The message boards have been a few steps ahead on this one, and it’s finally been confirmed…The Commodore (Dabney Coleman) is: 1. Jimmy’s pop. 2. Being poisoned.  3. Just might return for next season!  In the mix of these developments, Gretchen Mol as Gillian continues to put the most interesting spin on the “hooker with a heart of gold” stock character I’ve seen in years.  Kudos to the writers for keeping hers one of the most interesting characters on the show.  Meanwhile, Jimmy’s paramour (the eternally weepy Aleska Palladino) gets emotionally sucker-punched by the old switcheroo (her lady lover ran off to Paris with the photographer instead!) and by Jimmy’s stoic reaction to her now anti-climactic “Dear John” letter.  Poor old Nucky couldn’t seem to get a break as both Margaret and his brother came to verbal blows with him over this, that and the other thing, resulting in him announcing his brother’s resignation as sheriff and his Irish lass stealing away…  And last but certainly not least, a strong case for Equal Opportunity Employment is made as Van Alden goes all “Church of the Third Revelation” on his two-timing-number-two’s Jewish ass.  Whew…talk about a great set-up for next week’s season finale! END_OF_DOCUMENT_TOKEN_TO_BE_REPLACED 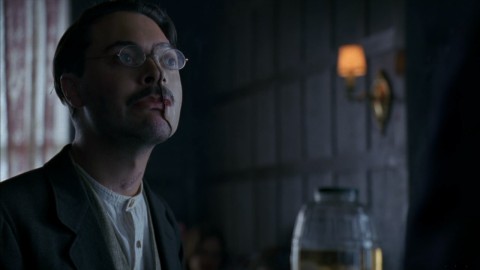 Written by:  Lawrence Konner and Terence Winter (series creator) from the novel by Nelson Johnson

The Spin:  After the dames get the right to vote, Nucky sees a golden opportunity with Margaret to rally the gals behind his new puppet for mayor.  Poor Jimmy mistakes his little boy’s outburst on the boardwalk about “mommy’s kissing friend” and beats the bejesus out of that sap of a photographer, resulting in his paramour plotting with the photographer’s wife to finally skedaddle over the pond to Paris takin’ the kid and all.  Meanwhile, snubbed after a visit with Margaret, Agent Van Alden falls off the wagon and runs into Lucy, resulting in the series’ most uncomfortable sex scene yet (a little more conversation would’ve been better).  Now get this – that giggly Doyle crosses the aisle resulting in a vengeful Chalky White botching a Nucky-planned rouse against Rothstein’s gang, resulting in two dead.  Back in Chicago, Capone has an unlikely revelation in a synagogue and decides it’s finally time to grow up – watch out world!  In your face (or shall we say half-faced) literary motifs (courtesy of The Wizard of Oz), the aforementioned sex scene, and a whole-lotta goin’ on resulting in all too obvious look in the mirror for Margaret made this a mixed bag of an episode.  END_OF_DOCUMENT_TOKEN_TO_BE_REPLACED

Written by:  Steve Kornacki and Terence Winter (series creator) from the novel by Nelson Johnson

The Spin:  Transsiberian and The Machinist helmer Brad Anderson directs this taut episode with great restraint and the best pacing since Scorsese’s pilot.   Fresh from Chicago, Jimmy tries to reestablish his family life much to his little lady’s dismay.  When he tries to pull a number on Lucky Luciano with Momma’s help, that crafty Van Alden spoils the party by bringing him in on murder charges for the Hamilton Massacre.  But what Van Alden doesn’t realize is that his number two is in cahoots with Nucky, and he does his own number on their star witness against Jimmy.  Meanwhile, as Nucky sets his sights on fixing the local elections, Margaret does her own bit of politicking.  All of this leads up to a shocking denouement on the boardwalk, brilliantly pulled-off by Anderson’s slow-build.  This pretty lady of an episode was an absolute knock-out. END_OF_DOCUMENT_TOKEN_TO_BE_REPLACED

I shot the sheriff, but I did not shoot the deputy.

Boardwalk Empire – Hold Me In Paradise

Written by:  Meg Jackson and Terence Winter (series creator) from the novel by Nelson Johnson

The Spin:  While Nucky politics in Chicago at the Republican National Convention, his brother gets shot back in AC, forcing him to call on the only person he can trust, Margaret, to protect his ledger.  Meanwhile, he recruits Jimmy to come back home, political alliances are formed, and we get a deeper glimpse into Agent Van Alden’s sterile family life.  Brian Kirk’s lethargic direction drowns out this Meg Jackson penned episode where much happens, but it all feels a little bit sleepy. END_OF_DOCUMENT_TOKEN_TO_BE_REPLACED

The Spin: Van Patten & Simms offer a wonderfully self-contained story arc involving Nucky’s relationship to his father in this compelling character driven episode that also closes out another major plot thread while stirring the pot with others.  Relatively tame in the sex & violence department, director Coulter shows that sometimes less is more, and the penultimate scene in a Chicago cafe involving a one-eyed sniper (Jack Huston) enacting revenge on Jimmy’s behalf against that Pearl-slashin’ Conan-lookin’ fella packed a wallop. END_OF_DOCUMENT_TOKEN_TO_BE_REPLACED 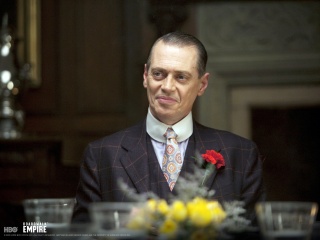 Written by:  Howard Korder and Terence Winter (series creator) from the novel by Nelson Johnson

The Spin:  Van Patten & Korder upped the sex, violence and general weirdness in this episode which might draw the line in the sand where some of the curious being strummed along now drop off and those hooked stay on for the long haul.  Keeping with the theme of female empowerment, Margaret (Kelly Macdonald) makes a conscious choice to become a “kept woman” only to have Nucky (Steve Buscemi) break her heart yet again, while he bemoans about trying to be good.  Meanwhile, in Chicago…Jimmy (Michael Pitt) wraps up his revenge in a shocking play for control of the Greek line in the name of Torio’s gang. END_OF_DOCUMENT_TOKEN_TO_BE_REPLACED 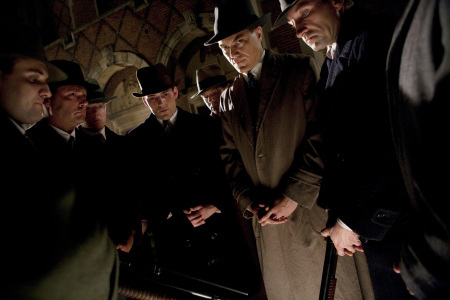 Written by:  Lawrence Konner and Terence Winter (series creator) from the novel by Nelson Johnson

The Spin:  Hell hath no fury like a woman…marginally annoyed by mixed messages?  Margaret (Kelly Macdonald), miffed by Nucky’s (Steve Buscemi) cruel indifference to her St. Patty’s Day soda-bread, reaches out to that creep Agent Van Alden (Michael Shannon) to show she’s not messing around.  It’s a special kind of lady who can pit two of the weirdest looking actors working today against each other in a play for her love disguised as a bootlegging smack down.  Meanwhile, Jimmy (Michael Pitt) gets all mopey and nostalgic caring for his amor in a Chicago cat house.  This Konner-penned, Alan Taylor-directed hour is the classic “a lot happened but it didn’t feel like a lot happened” episode.  The “Nights in Ballygran” montage at the close was a nice touch leading to a “finally!” moment that came much sooner than I had predicted. END_OF_DOCUMENT_TOKEN_TO_BE_REPLACED

The Spin:  How empowering it is to see a show where many of the writers also serve as executive producers!  While director Podeswa takes a cue from Scorsese and fills this amazingly layered and poetic episode with wall to wall period music, the writers (most notably, I am to assume, Nagle – who also penned Episode Three) settle into their groove.  Woven into this compelling hour are national politics, women’s rights vs. violence against women, race relations, romances, jealousies, turf wars and a wonderful “time capsule” of a frame story involving Princess Anastasia.  There is so much to admire in this episode, but it clearly belongs to the women from writer/producer Nagle, to stars Kelly MacDonald and Gretchen Mol to Emily Meade as the kind-hearted hooker Pearl.  Last week the focus was on dark humor, which rightfully leads to a quietly aching sadness in tonight’s affairs – as if reality is now staring the audience and the characters in the face.  If the writers keep this up…we’re looking at a show to rival Mad Men. END_OF_DOCUMENT_TOKEN_TO_BE_REPLACED