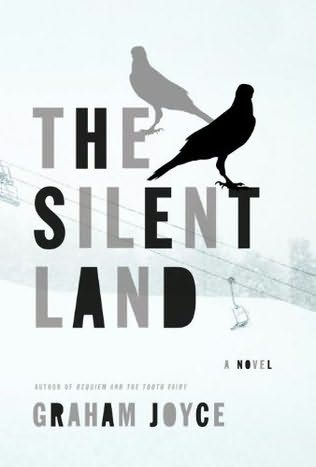 After getting caught in an avalanche while on vacation at a French ski resort, Jake and Zoe dig out only to find a world empty and deserted…a silent land where “the laws of physics and the laws of dreaming meet” and where “horses shit rainbows.”  No, I’m not kidding.

I don’t know why I always allow myself to be lured into these quasi-fantasy, quasi-apocalyptic, quasi-psychological tales where two people (in this case, a husband and wife) traverse through a mysterious and perhaps dangerous netherworld trying to prove their undying love for each other while struggling to maintain their sanity.  This one even comes complete with a twist ending.  This is essentially the same archetypal story as the far grimmer but no more satisfying The Road.  I guess I always give these novels and movies a chance because it’s a universal concept that if done right and with enough imagination, it could reach mythic status but more often than not ends up frustrating and trite.

Graham Joyce’s novel may have been more successful if it had been a short story.  Instead, what we have is the equivalent of an O. Henry story re-imagined and stretched out by M. Night Shyamalan.  Like Cormac McCarthy’s The Road, we are stuck with these two going through repetitive and drawn out situations where the truth is slowly realized.  And least in The Road we were able to feel something for the man and his young son.  Here we have a vaguely hip married couple with little to no personality who are no fun to be around.  They’re faux-atheists, sarcastic, slightly emo, not very creative, and pass most of the time skiing and having sex.  We get very little back-story (spare for two judicious flashbacks detailing the deaths of their fathers) and Joyce feeds them boring and unrealistic dialogue where when not bickering or declaring their love for each other, they speak in overreaching quasi-philosophical generalities.

While I tired of this easily, I can still imagine some readers finding this interesting, especially after the big reveal and they start thinking about all the clues that were placed in the narrative and how it all adds up.  People who watched and enjoyed Lost until the very end or who think Shyamalan has made more than one clever film will probably find this to be adequate entertainment.  It’s a quick and easy read where the story inhabits familiar ground with comfortingly creepy imagery.  With all of Joyce’s endless and gothic tinged descriptions of mountains, snow, full moons, howling winds and wraith-like darkness, The Silent Land could help you cool down while lounging mindlessly on a hot beach this summer.  Otherwise, it doesn’t even pass muster as a good doorstop.

2 comments on “The Silent Land”