Home is Where the Heart is in 42 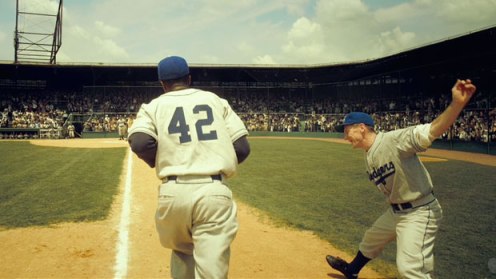 The true significance of the number 42 has nothing to do with The Shining or The Hitchhiker’s Guide to the Galaxy.  Everyone knows the story of Jackie Robinson, right?

Well, maybe not.  And maybe as a long-time baseball fan (not just of the game, but of the history and of its impact on American society) I took that for granted.  As the first African-American to play in the major leagues, Jackie Robinson put a dent in segregation in 1947 (and wore the number 42) long before Jim Crow laws were dismantled and the Civil Rights movement caught on years later.  Thanks to Brian Helgeland’s handsomely mounted and wholesome-as-Ma’s-meatloaf biopic, 42, younger generations will now have an entertaining and educational film to watch in history classes for decades to come.

Robinson is played with heart and panache by newcomer Chadwick Boseman while Nicole Beharie makes a nice splash as his devoted and strong-willed wife, Rachel.  Their love story forms the backstop of the story while Harrison Ford relishes in a playful scenery chewing turn as the moral trailblazing GM of the Brooklyn Dodgers, Branch Rickey.

Even as a diehard baseball fan, Helgeland’s film sheds light on things I wasn’t aware of — like manager Leo Durocher’s suspension for adultery (apparently the Catholic League threatened a boycott over his affair with an actress).  And who knew that my home city of Philadelphia was a stronghold of such…shall we say…finely stewed racism?  Durocher is played by the stupendous Christopher Meloni, whose late night speech to the team, at spring training in Panama when a petition is passed around threatening that they will all sit out if Robinson stays, is one of the early highlights.  The supporting cast is all top-notch with Lucas Black excellent as the sympathetic Pee Wee Reese — an iconic image of Robinson and Reese on the field is lovingly recreated — and John McKinley turns in a great piece of character acting as the famous commentator Red Barber who said things like, “This game is tighter than a new pair of shoes on a rainy day.”

And it’s that nice attention to capturing the spirit of the times, along with the well shot game play, that make 42 such a winner.  As a fan of the game, I loved the recreation of the old ballparks which often sat in the center of neighborhoods and cities, and the depiction of Robinson’s famous footwork on the base pads is a real treat.  The color commentary of Barber as well is a hoot to hear.  But it’s not all Norman Rockwell paintings, nice music and quaint period talk.  I give the filmmakers a lot of credit for not sugar-coating the infamous taunting tirade of the Philadelphia Phillies manager, Ben Chapman (Alan Tudyk).  This sequence plays in near real-time and should serve as a true sucker punch to the gut to modern audiences unaware of how overt, casual, brutal and ingrained the racism was back then.

Still, the movie is decidedly square.  The opening moments play awkwardly (as if it didn’t know where to begin the story properly and wanted too early to begin its epic swells), and it takes about a half hour before the film finds its rhythm.  The voice-over of a pioneer African-American sports-writer also seemed unnecessary.  A well-edited closing montage of Robinson hitting a home run that clinched the Dodgers the pennant in his rookie year made it visually clear that home was where his heart was and Rachel his rock.  We didn’t need the narration telling us that, too.

Yet with a film so earnest and true, it seems cruel to nitpick.  So by all means, see 42.  Take your kids.  Take your parents.  Leave the theater a little better than you came in.