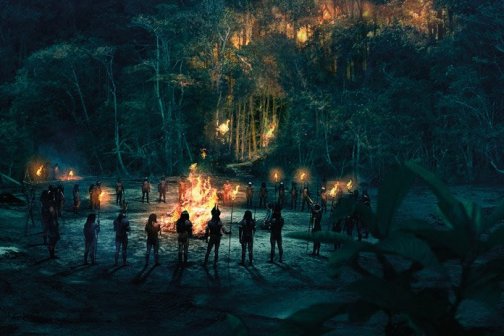 Writer/director James Gray’s latest cinematic tome, The Lost City of Z (based on David Grann’s bestselling book about the incredible true story) unfolds like a long…very long…novel. It’s a curious think-piece about a man’s obsession with finding a lost civilization in the Amazonian rain forest that despite being handsomely mounted (among many other cinematic accomplishments) lacks momentum due to a decidedly old-fashioned pace. Yet, there is so much to admire here.

Witness the classical cinematography by Darius Khondji, exquisitely lit and painterly to highlight the sumptuous locales and pristine production design. Individually there are some amazing sequences staged by Gray and Khondji, including the film’s opening elk hunt done up in a thrilling manner that one wishes would’ve punctuated later moments in the epic narrative. While overall the film could’ve used some judicious editing (and script tightening), a series of amazing dissolves and scene transitions (witness liquor poured onto the uneven floorboard of a ship transition into steam from a train cutting across the Bolivian countryside…or wind through the Amazonian jungle transition to a seaside breeze in England fluttering white curtains inward over the desk of a wife reading her husband’s letters) create indelible moments one wishes to savor like a top shelf whiskey.

One of the film’s other curious coups is utilizing a cast I wouldn’t normally think of as great actors to deliver barn-burning performances. In the lead, Charlie Hunnam at first comes across as the poor person’s Brad Pitt, until you realize he can act circles around Pitt (ironically the film’s producer). Then there is Robert Pattinson, completely unrecognizable, playing a memorable character that is equal parts Quint and Hooper, the perfect companion to Hunnam’s Percy Fawcett on his maddening quest. And finally there is Sienna Miller as Fawcett’s fiercely independent and loyal wife, who delivers a fiery performance that transcends what a lesser actress may have turned into a thankless role.

But despite all this, I kept finding myself focused on the film’s pacing. Gray tells the tale as a sprawling triptych chronicling Fawcett’s three expeditions (and the familial, societal, and world dramas in between). One wonders how the film would’ve played had it not been told linearly, as there are some brilliant moments when we see Fawcett transported to haunting moments in his past (or unknown future) in his mind. The linear structure, counterintuitive to its very nature, saps the drama of its forward momentum…and potential metaphysical depth.

Or maybe it was just me. As much effort as everyone involved put into telling this story, I had a very hard time relating to Fawcett on a deeper level. His motives were as clear as the long, clean lines of Khondji’s cinematography and Gray’s direction. For a story about a mysterious civilization, there wasn’t much mystery. It didn’t make me wonder. Oh, but there was so much to admire in the noble but ultimately foolhardy efforts of both Gray and his muse.