Life is very very Complicated and we’re ready for our Mirror, Mr. Lynch 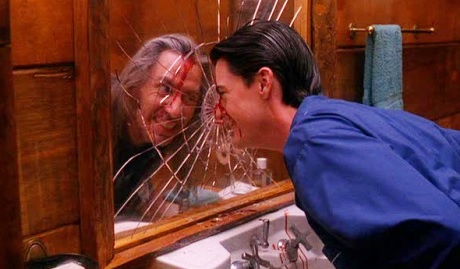 Life is very, very complicated, and so films should be allowed to be, too. – David Lynch

David Lynch has been saying that the new “season” of Twin Peaks is really just an 18 hour film. And, Jeeze Louise, ain’t the world all kinds of fantastic complicated right now? What better time then for a complicated, complicated film that will last all summer long?

I can’t help but muse upon the context with which we are about to consume this 18 hours, where Bob-willing we’ll get lost in a place both wonderful and strange.

Lynch is a proud Eagle Scout, and his re-entry into the social consciousness couldn’t be more eerily timed as two other Boy Scouts (Comey and Mueller) play detective in an attempt to unearth just what in Sam Hell is going on in the White House these days. Is there a world in more need of Boy Scouts than the world of today?

Be Kind. Be Courteous. Be True. And most importantly…Be Prepared!

Lynch has historically had an uncanny mastery of tapping into…”something”…that may have been unbeknownst to him at the start of the project. What will he accidentally tap into here (what big fish has he caught)? What was it that was so special…so great…about the context in which Twin Peaks enthralled a nation and world over 25 years ago? What is different…or the same… about the context today in which Twin Peaks returns?

What was the original Twin Peaks if not the tale of a Patriarch (Leland Palmer – possessed by Bob) run amok – and a Boy Scout (Cooper) who solved the mystery about what made that mad man tick (but alas, did we ever learn how to make Bob stop)? Weren’t we all Laura Palmer – living under Killer Bob’s tyrannical reign and longing for a way out?

And don’t we all love a good mystery? Don’t we all desire to get lost in those woods again? Can’t you just smell those Douglas Firs? How cathartic does this return to Twin Peaks have the potential to be? What will it say about our shared fears…about the American soul…about aging…about dying…about life?

We all have our hopes up so high…but even if it fails to tap into some sense of what Makes America Great Again…at the very least, I hope this new mystery provides a most pleasant diversion to the turmoil we’ll be roiling in all summer long (and perhaps beyond).

As I immerse myself in this world again, I will try to only report – hour by hour – on what is seen, what is felt. I’ll try to keep politics out of it. But all great art is made greater in equal parts by the baggage both the maker and the viewer bring to it. And, oh brother, we have a lot of baggage to unpack. So Be Prepared!

Don’t let us down, Davy boy…we couldn’t be more ready for complicated if we tried.

And Don’t Forget to Follow the Hour by Hour Spin, Brave Boys and Girls!