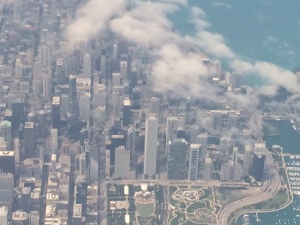 It’s been 16 years since I last went to Chicago.  I’ve changed a lot since then (and so has the Chicago skyline, most notably with the can’t-miss-it Trump Tower), and it’s certainly interesting to return to a city of good memories to create new ones in an entirely different milieu.  Last time there was a boat tour, a comedy show and tons of laughs.  This time there was a boat tour, a comedy show and tons of laughs.  Good people having good times in good places marked both visits.  But this time there were also drinks at the top of the Hancock, a 4th of July Cubs game, fireworks galore (apparently Chicago is intent on trying to recreate the Great Chicago Fire every 4th – never have I seen so many fireworks and we were lucky enough to not only enjoy them at the ballpark but also afterwards when we were treated to a panoramic view from a residential balcony that gave amazing views of the dark city horizon and burbs bursting with bombs), the Art Institute of Chicago, Millenium Park, and the Frank Lloyd Wright Robie House at the University of Chicago.  Apparently my 35 year-old self can run circles around my 19 year-old self in terms of sight-seeing (and many many other things – I’m one of those few who loves being an adult and getting older and wiser).

Here are the requisite shots that hallmarked this trip: