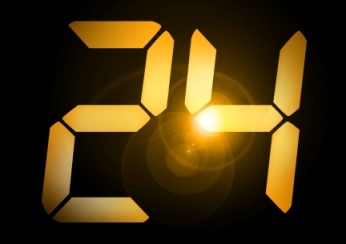 Monday, May 24th 2010 at 8PM EST Fox will air the two-hour series finale of the most groundbreaking network television show of the past decade.  The ticking clock, which at times seemed eternal, will stop once and for all on Jack Bauer and 24.  It’s time to look back and share your favorite 24 memories as The Schleicher Spin bids a bittersweet and fond farewell to an old favorite.

Take yourself back, if you will, to the fall of 2001.  Fox had a daring idea to create an action-thriller that took place in real-time over the course of an entire day where each one hour episode would be one hour in the crisis-filled life of counter-terrorism guru Jack Bauer.  The premier was delayed, however, when the ultimate act of terrorism occurred in real life on 9/11.  Wanting to remain sympathetic to a mourning populace still in a state of shock, Fox chose not to air the first episode until November.  And thus the most groundbreaking network television show since Twin Peaks debuted quietly under subdued hoopla with a sequence featuring an uber-hot terrorist (played by Mia Kirshner, whose character would become the greatest reoccurring villain on the series) casually leaping from an airplane in mid-flight and setting off a bomb that would kill everyone onboard.  It was a sobering moment of fiction that eerily mirrored an even more imaginative and horrific act of mass murder still too fresh on people’s minds.  And it was this moment that set off a spiraling series of events that would shape the television landscape and American pop-culture psyche for the next decade.

24 plowed on from there with feverish intensity…and it caught on eventually with all its split-screen formatting, cell-phone dialing, satellite re-tasking, bomb defusing, and cliffhanging fun.  Jack Bauer would live another day…and another…and another…as the series went on ad-infinitum for what has seemed like an eternity.  END_OF_DOCUMENT_TOKEN_TO_BE_REPLACED