It’s that time again for The Spin to whip up a seemingly random hodgepodge of recent films viewed in theaters, on VOD and on Netflix and draw tenuous lines connecting their themes while passing judgment on the merits of their attempts to be profound or entertain. 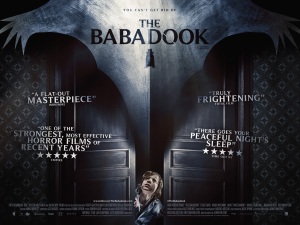 First up is the Kickstarter-funded first feature from Australian writer-director Jennifer Kent currently playing in select theaters and available on VOD.  In The Babadook (a title, that like the film, can take on multiple meanings), a single-mom/nurse (Essie Davis, absolutely outstanding at becoming unhinged) is struggling to raise her out of control, starving for affection and monster-obsessed six-year old son (Noah Wiseman, effectively obnoxious and cute and seriously troubled) whose father died in a car crash on the day he was born.  Their toiling roiling relationship reaches a fever pitch when a creepy would-be charcoal-etched kid’s book, Mr. Babadook, finds its way into their house and refuses to be ignored.   The film, an expressionistic psychological thriller neatly wrapped in a horror gift box, is derivative as hell but also smartly crafted to show the damaging effects of not dealing with grief, unmanaged stress, sleep deprivation and paranoia.  The creepy music, sound effects, cinematography, and art design are all well woven by Kent, who hints at a very promising future.  The ending will be a let down to some, but like the best psychological thrillers, is open for multiple interpretations depending on whose POV (the mother’s or the son’s) one takes.  The Babadook represents the best of what films can and should get funded through Kickstarter and is a creepy fun ride for anyone with any passing interest in psychology and the horrors of a human mind unwound. END_OF_DOCUMENT_TOKEN_TO_BE_REPLACED