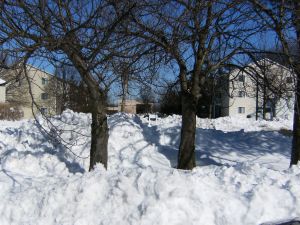 The calm between the storms: And just where do they plan on fitting another foot of snow?

They sure do like to rush the sequels these days.  Just barely 72 hours after Snowmageddon dumped 20 inches or more over most of the Mid Atlantic, the sequel was rushed into production and now we have Snowmageddon 2:  The Sleetpocalypse, arriving mid-week no less and snowing-in the same area (and then some) once again.   As Dickens would say…it was the best of times, it was the worst of times.

But it seemed the perfect cabin-fever brew to stir up some inspired work on that novel…you know…the one I’ve been babbling about since — For the Love of Pete — April of 2008!  Though I have much of the outlining and research completed and even drafted a very rough first chapter, one thing I have been wrestling with is crafting that perfect, killer opening line.  They say you have to grab a reader’s attention instantly, and if you don’t hook them with the opening, then they are less likely to come back.   I decided to test that theory and thought what better way to procrastinate than to hit my bookshelves and crack open some of my favorite novels and current reads to see how the masters of their craft hooked readers with that opening line.

I invite my readers and fellow bloggers to do the same and leave some of you favorite (or worst) opening lines to novels (or screenplays) in the comment form!

Here are some of my findings: END_OF_DOCUMENT_TOKEN_TO_BE_REPLACED