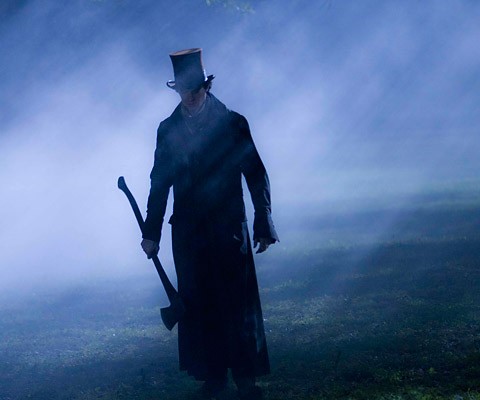 Abe Lincoln has an axe to grind with you!

I am disheartened to report, ladies and gentlemen, that Abraham Lincoln: Vampire Hunter (the film based on the Seth Grahame-Smith novel) is a most spurious piece of anti-Vampire-American propaganda that tarnishes their good name and celebrates their horrific and callous mass destruction!  The litany of crimes attributed to Vampire-Americans is legion.  Would you believe the following?

The reason slavery flourished in the American South?  Vampires!

The reason a young Abraham Lincoln got into politics?  Vampires!

The main cause of the Civil War?  Vampires!

The source of Mary Todd Lincoln’s depression and madness?  Vampires!

But seriously…to all of those crying foul over this preposterously premised film not containing a single note of humor…well, you obviously missed the joke.  I applaud the filmmakers’ absolute conviction in presenting the material dead seriously.  Taking a Zombieland approach wouldn’t have worked and would’ve made the film even more painful to sit through.

What are fair game, however, are the film’s obvious flaws such as the clamoring sound design that rendered some dialogue incomprehensible coupled with some of the most hacksawed editing this side of a Michael Bay film where scenes or spoken lines were often cut off mid-thought only to race to another scene before the viewer could even digest what happened.  END_OF_DOCUMENT_TOKEN_TO_BE_REPLACED

It’s weird how one movie experience can affect another.

CAPTION:  Yeah, pretty much, what the hell?

Over the July 4th weekend I rented Be Kind Rewind and brought it over to my brother’s place to watch.  I had such high hopes for this flick.  I think it’s amazing what director Michel Gondry was able to do with Eternal Sunshine of the Spotless Mind, and I’ve enjoyed his sense of humor (in Human Nature) and melancholic whimsy (in The Science of Sleep).  It seemed like his brand of moviemaking would fit well with Jack Black’s style of comedy in this movie about a hapless trio of fools who remake classic films when all of the videotapes at a nostalgic rental shop are erased by radioactivity.  I couldn’t have been more wrong.  Be Kind Rewind desperately tries to capture the magic of independent filmmaking and is a complete failure.  There’s a scene where Jack Black’s character (after being made radioactive) urinates in the street, and his urine is glowing as it goes down the gutter.  That’s how I felt this movie treated films.  Be Kind Rewind is painfully unfunny, lacks a single authentic moment, and contains ridiculous stereotypes pretending to be characters.  It also paints a view of the greater NYC area of northern New Jersey that is like a pot smoking Frenchman’s view of America after watching a marathon of What’s Happening on TV.  This is an insulting film to avoid at all costs.  It’s so awful and unforgivable, I’m not sure if Gondry can ever recover from this.

Embarrassed I had rented it, and wanting to wipe it from our memories, my brother and I headed out to the multiplex for some old-fashioned mindless fun and saw Wanted.

The whole comic-book inspired “average schlub is picked to join mysterious fraternity of assassins” plot didn’t exactly interest me, but everything else about the film appealed to my basest moviegoing desires.  Directed by Timur Bekmambetov (say that five times fast) and starring a tattooed Angelina Jolie and a willful James McAvoy, Wanted is sadistic, profane, action-packed fun.  Our Russian pal Timur was previously responsible for the kinda cool Night Watch and its kinda stupid sequel Day Watch.  With Wanted, he shows no restraint, and crafts a bombastic movie that, like Be Kind Rewind, defies all logic and doesn’t make a lick of sense, but who cares?  What’s not to like when we get to see Jolie stepping out of a bath and one of the most amazing action scenes ever orchestrated involving a train, a car, and a bridge over a giant gorge?  Did I mention the giant army of explosive rats and the magic “Loom of Fate”?  Oh, yeah, there’s all that and more.  Sometimes all you need is a better movie than the last one you saw, and for us, Wanted fit the bill.